Modern cars are continuously monitoring your car’s systems and provide warnings whenever there is a malfunction. Everything is activated and checked when you start the engine. All of the dashboard lights will illuminate for several seconds and then turn off.

The check engine light may also illuminate. If this light turns on while driving, there may be a problem with the battery, the charging system, the serpentine belt, or a bad wiring harness and should be investigated.

10 Common Reasons You Have A Battery Light On While Driving

There are many different reasons for the dashboard battery light turning on. We will discuss each of these in more detail. However, never turn your engine off until you can drive it to a location where the charging system can be checked.

You probably might not be able to use the ignition system to restart your engine if the battery is fully discharged after the light on the dashboard turns on. A symptom of a discharged battery is when your car lights are dim.

The typical car battery should last from three to five years, depending on the environment they operate in. The lead-acid plates sometimes break as they age, and the electrolyte solution can leak, leaving the battery incapable of doing its job.

When batteries fail, they are fully discharged and can also freeze in cold temperatures, cracking the case and causing it to leak. Car owners should replace the battery if it begins leaking. Loose connections to the battery terminals or bad grounds can also cause the battery not to hold a charge.

The alternator produces AC, which is converted to DC to charge the battery and run the cars various electrical systems. Car owners can measure the output and should be able to measure between 13.6 and 14.6 volts. If the voltage falls below 12 volts, the battery light is triggered.

The voltage regulator controls the output of the alternator and maintains the output at a safe level of 14.5 volts. This component could also be the component that may be causing the battery light to illuminate. Have your bad alternator and electrical system checked and repaired as required. 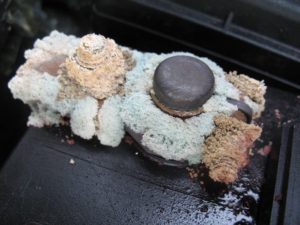 Check the battery terminals for the telltale sign of corrosion. If there is a white flaky substance around either terminal, this material could be adding resistance to the flow of electricity, and your battery may not be charging correctly.

The material is acidic, which can irritate your skin and even damage the paint finish on your car. Car owners can use one tablespoon of baking soda dissolved in a cup of water to clean the terminal.

The solution is alkaline and neutralizes the acid. Use a wire brush to clean the terminals while protecting your eyes and hands.

Battery cables can be damaged from other chemicals, or they may rub against a metallic edge of the car wearing away the insulation and causing a short circuit. Older cars may also experience cracks in the insulation around the cable, which may cause the wires to corrode. Any of these conditions can limit the charging of the battery as well as limit the flow of electrical power to your car’s systems. 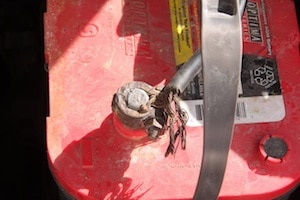 There are many wires that make up the electrical system in vehicles. Any of these wires could be damaged, become corroded, or break, limiting the ability of the system to charge the battery.

Connections can also become loose and disconnect, or the connectors can break. Often a disconnected or broken wire can cause the car battery light to illuminate. Older cars may experience this type of problem due to age.

Always consult a professional when dealing with faulty wiring especially if you need to disconnect the battery.

Ground straps connect various electrical components of the car to the frame and provide the return path for current to the battery. Ground straps can also become damaged, or the connections may become loose due to vibration over time.

Older cars suffering from corrosion of the frame of the car near or at the connection of the ground strap may also reduce the ability of the battery to be charged fully. Various systems may stop working, or lights may be dimly lit.

The alternator belt or serpentine belt drives the water pump and the alternator. Most new cars have one belt that winds its way around these devices, the crankshaft pulley, and several tension pulleys. A bad alternator belt may become frayed and break or become loose.

If you notice a burning smell, have your belt checked. In both cases, the alternator does not turn and does not produce sufficient electricity. Your engine can run for a short time utilizing the electrical charge from the battery. Once the battery is fully discharged, the engine will stop running altogether.

Battery connections can also become loose. If you can turn the cable connector on either of the battery terminals, they need to be tightened. This is an excellent time to clean the terminals and the connectors before re-tightening.

Do it yourself mechanics must be meticulous to avoid shorting the positive terminal to the negative terminal or to the frame of the car. Severe burns and electrical shock could occur if this step is not completed safely. Wear protective eyewear and gloves.

9. Excess use of external accessories

However, some car owners will add aftermarket sound systems and other gadgets that consume lots of power from the battery. If they draw more power than the alternator can produce, they are draining the battery of stored power, and the battery light will illuminate on your dash.

If you cannot start your car, it may be a dead battery causing the problem. First, check the intensity of the headlights. If the lights are dimming or do not turn on at all, your battery is likely discharged, or there is a loose battery cable.

Check and tighten all of the connections. If the lights are bright, there could be many other problems causing your car not to start. Leaving the interior lights causes the battery to drain, although newer conventional vehicles automatically turn them off after a specified period.

Ask a friend or call a tow truck to obtain a boost to start your car. Follow directions regarding how to connect the battery of your car to another car to avoid short circuits and damage to the battery. Check the battery for damage? If it is older than five years, replacing with a new battery is likely the best solution.

However, most likely, the best course of action is to have a mechanic check the charging system to ensure there are none of the other related problems that may have caused your battery to fully discharge.

F.A.Q. Battery Light On When Driving

You can see that if your car died due to battery malfunctioning, there are plenty of different reasons why it can happen. It can be as simple a for you to recharge the battery, or having to remove some specific car parts to get the issue resolved.

A battery light flashing is the most obvious sign that there is an issue that needs to be addressed. By this time it is always good to get the battery tested. Some of the common FAQ’s are as follows:

Can you drive with a battery light on while driving?

The answer is, “yes,” there is enough power stored in the battery to drive short distances. However, car owners should proceed to a car repair shop where the charging system and the battery can be checked and repaired as needed.

Never turn the engine off until you arrive at your intended location. The battery light means your charging system is not charging properly. You probably may not be able to restart the car if the battery is fully discharged.

What should I do if the battery light illuminates?

Check that the serpentine belt is still in place, check that the cables attached to the battery terminals are tight and there is no corrosion. It is safe to drive the car to a repair shop and have the battery charging system and battery checked. Avoid becoming stranded somewhere and needing an expensive towing charge.

How do I know if the alternator is the problem?

Check that the serpentine belt is still in place and turning the alternator pulley. Test your alternator voltage output, which should be between 13.6 and 14.6 volts. Anything less than 13.6 volts could indicate a bad alternator or bad voltage regulator. Replace these items as needed.

Tip: Clean corrosion on the battery terminals of your vehicle.

Battery Light On When Driving Summary

Sometimes car owners confuse the low tire pressure warning light with the actual battery warning light. In fact, no one thinks about this issue until they see a car shutting down due to battery problems.

During cold weather, a weak battery can also play a car not cranking games on you. You will notice faulty power windows and flickering dashboard lights.

If the battery light illuminates on your dash, it is vital that you take action immediately. The battery light indicates the charging system is not working properly and could you leave you stranded with a weak or dead battery and unable to restart the engine.

Has the electrical charging system checked by an auto repair and maintenance shop as needed? For more fuel efficiency tips, follow our blog and social media.