Many also replace an older battery before a dead battery that can no longer hold an electrical charge strands them along the road. A little maintenance can save a great deal of time and expense.

In this post we will cover how to disconnect a car battery safely in this post. The process of disconnecting your battery is reasonably straightforward.

However, any time you work on your car, there is the right way to do things and a wrong way. Above all, practice proper safety to avoid accidents.

10 Steps On How To Disconnect a Car Battery Safely 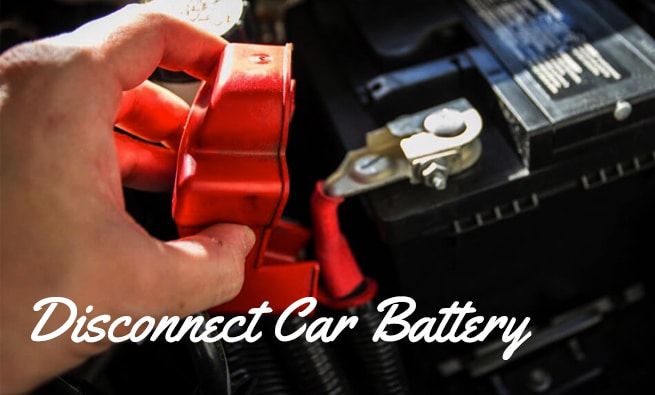 Anytime you are working on your car, there is potential for accidents, and disconnecting the battery is no exception. Follow these steps to disconnect your battery from the positive and negative terminals in a safe manner.

1. Open the hood of your vehicle

Locating your battery is the first order of business. Most batteries are located in the engine compartment of most cars. However, some vehicle manufacturers place the battery in the trunk behind a flap, under the rear seat, or the floorboards. If you cannot find your battery check your owner’s manual. There may also be a plastic cover protecting the battery under the hood.

2. Put your protective gear on

Once you have located the battery, put on your protective gear before you begin examining the battery or cleaning off the terminals. Accidents occur at the most surprising times, and it is better to be prepared. Also, wearing gloves protects your hands from acidic corrosive materials that may be on the battery, the housing, and the terminals.

The negative battery terminals are marked by a (-) negative symbol. Usually, the positive terminal is covered by a plastic protective barrier and has a (+) on it. Remove corrosive material using baking soda mixed with water before disconnecting the negative terminal. You might use rags that can be safely discarded to clean and dry the area.

4. Figure out the socket size

Using a socket and socket wrench is always better than using vice grips or an adjustable wrench. Vice grips can damage the nut on the clamp, and there is a risk that the vice grips will slip off the nut. Find the appropriate socket size to fit the nut on your battery terminals clamp. You may need to use either metric or SAE sockets depending on where your vehicle is made.

Place the correct size socket on the wrench and begin loosening the bolt holding the cable to the battery terminal. Be very careful to avoid the socket wrench coming in contact with the positive terminal. Doing so would cause a high current short across the battery terminals, potentially causing sparks, fire, and even explosion.

6. Loosen the nut of the negative terminal

Remove the negative cable using a slight twisting action and lifting the cable at the same time. Once the cable is free of the terminal, wrap the end with a plastic bag or a cloth and set it to the side of the battery well away from both terminals. Zip ties can be used to hold the cable in place out of the way.

8. Loosen the nut of the positive terminal

Remove the positive terminal using a twisting motion while lifting it at the same time. Push the positive cable to the side and wrap it as well to avoid accidental shorts as you work on the battery and remove it from the compartment where it is housed.

An automotive battery can be quite heavy, as much as 50 to 60 pounds, and awkward to remove. Remove the old battery while being careful to avoid dropping it on the engine or some other area of the vehicle. Be careful lifting and replacing the car battery.

Get The Right Tools For Disconnecting the Battery

With the right tools and training, every job can be easy. Using the wrong tools risks damage to the battery in this case as well as the process may be unsafe.

A socket wrench set makes short work of loosening the bolts holding the battery cable in place. The tool set can be used for many different jobs around your car and home. Make sure you select metric or SAE based on the specifications of your car.

A good set of mechanic gloves protect your hands from electrical shock, acids from the corrosion around the battery terminals, and provide physical protection to prevent injury. Also, these gloves would be very useful for other car maintenance activities.

Cleaning corrosion calls for baking soda and water to remove the buildup of acidic oxides on the battery posts. Protect your eyes from potential splashes of liquid as well as projectiles that could penetrate your eyes.

After you have these tools in hand, you are now ready to start locating the negative terminal or connector. Go back to the first step of the article so you can disconnect the car battery properly.

Safety Tips When Removing the Battery

Shorts, corrosion, and weight all present potential safety hazards during battery removal. The corrosion that may have collected around the battery terminals can be damaging to your hands if not protected, your clothes and also the paint finish on your car.

Use gloves to protect your hands, baking soda, and water to dilute the acid. Remove your wedding ring to avoid damage to it and accidentally causing a short circuit.

Avoid accidentally shorting the battery with your socket wrench or allowing the negative cable to touch the positive terminal. Arcing, sparks, etc. can occur if you are not careful.

Tip: Always try to avoid contact with metal to prevent any sparks.

There are several questions frequently asked by readers about removing a battery from their cars and trucks.

How to distinguish positive and negative?

All later model vehicles have added a protective plastic cover over the positive terminals to prevent accidental shorts across the two terminals.

Does disconnecting my auto battery when on vacation work?

Many experts feel that car owners should disconnect the battery when the owner goes on vacation. All batteries suffer a slight discharge while not being used, which causes a battery drain. your can test the battery when you come back from vacation.

Also, the electrical systems and components in your car, such as clocks, alarm systems, on-board computing systems, all draw small amounts of energy while the car is parked. Coming back from a long vacation could find your battery completely drained and possibly damaged as well.

Car owners in cold climates should consider removing the battery and placing it in a safe, warm location (not on the basement floor) to prevent freezing once it is discharged. You may still need to use a battery charger to recharge your battery after a long vacation.

Is it safe to disconnect the battery?

Car owners practicing safe procedures and wearing safety gear can easily disconnect the battery and remove it from your vehicle. Check your manual for any special considerations, and follow the steps outlined earlier in this post.

If your uncomfortable completing this procedure, arrange for a mechanic to disconnect the cable of your dead car battery and install a new one. Arrange to have regular car maintenance and repairs completed at the same time.

Which battery terminal must be disconnected first and why?

When you are disconnecting your car battery, the batterys negative terminal should be disconnected first. This will reduce the chances of sparks, which can be of high risk for the car owner.

Once you have disconnected the negative terminal, proceed to remove the positive terminal to complete the process of replacing the battery.

Tip: Using a wrench to loosen or remove battery nuts will make the process easier.

Car batteries are usually located inside the engine compartment. Utilize safety gloves and eye-wear when you are working on your battery or around your car. Clean the battery terminals with a mixture of baking soda and water to neutralize the acidic material.

Remove the negative terminal first and place it to the side of the vehicle’s battery, wrapped with a protective cover. Disengage the positive cable in the same manner. Remove the clamps on the tray holding the battery in place and carefully lift it out of the engine compartment.

Make sure you wear safety protection every time that you are dealing with an electrical component. Negative battery cables should never touch positive ones at any time. The next process would be to install or get the new battery connected. Using an adjustable wrench will facilitate the workflow.