Every car is equipped with SLI batteries to provide power for starting, lighting, and ignition of the engine. The battery provides power during overload situations when the alternator does not provide sufficient power to run all of the electrical accessories on its own.

For example, when your engine is idling with all of the lights on, AC running, engine cooling fan operating, radio, etc. So, how does a car battery work, and what does it do?

Your battery provides power to devices such as on-board computers while your vehicle is parked with the engine off. Battery applications are numerous; however, we are focusing on the batteries that operate our vehicles. Batteries start our cars, provide power for the lights, and the numerous electrical systems in our cars.

What is a car battery?

Every battery is composed of cells that store chemical energy. Each cell has three chemical active material components, two lead plates, and the electrolyte.

Watch this video from Donut Media that explains a car battery in detail:


How do car batteries work? (Step by step)

What are the components of a battery? 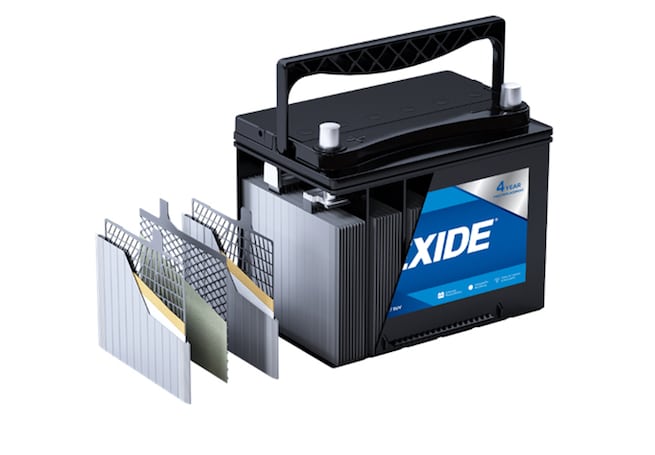 The main components of the standard auto battery are positive and negative battery terminals, a lead plate, a lead dioxide plate, and sulphuric acid between the plates.

The positive battery plate is made of lead and connects to the positive terminal on the outside of the battery.

The negative battery plate is also made of lead and connects to the negative terminal on the outside of the battery.

There is a plastic separator separating the two plates. This separator is constructed of a permeable synthetic material, to keep the two plates from touching each other.

The entire battery is housed in a plastic case or container. Many batteries are sealed and require no maintenance, while some have a removable cap for each cell to add water to the battery.

The acid in the battery is a combination of sulfuric acid and water that covers both lead plates and provides the medium for ions and electrons to transfer between the plates.

A cast on strap connects the lead plates of each cell of the same polarity creating a series connection across the battery for each polarity.

Energy is generated in the form of electrons flowing between two materials, one negative and the other positive through an electrolyte, usually consisting of sulphuric acid and water.

There are usually six cells in the typical car battery connected in series to produce 12 volts in total. Charging a battery reverses the process and stores up energy.

Cold cranking amps measure the ability of a battery to deliver energy at a specified temperature. Typically, it is the number of amp-hours delivered at zero Fahrenheit for 30 seconds while maintaining voltage levels better than 7.2 volts. A higher number of amps indicates greater starting power, especially during colder temperatures.

Most modern batteries are now sealed, which avoids accidental acid spills while a battery is being transported.

Since batteries contain lead and acid, they must be recycled at designated battery recycling facilities to avoid environmental contamination. Also, avoid shorting the positive and negative terminals as you work on the battery to avoid electrocution and damage to your car.

Battery group size is a standard used in the auto industry to specify battery size, polarity, and location of the terminals. This approach helps battery, as well as car manufacturers, manage costs while designing vehicles. Auto repair shops use these battery group sizes to ensure that the proper replacement battery is selected.

Automotive vehicle electrical systems are standardized around 12 volts. Each battery usually consists of six cells, each producing 2 volts or 12 volts in total. All electrical components in your car are designed around this 12volt battery standard, including automobile aftermarket accessories that many drivers add.

Automotive battery technology is evolving with many improvements that add to their life cycle, power levels, and safety. Various lead acid battery types are manufactured utilizing sealed technology to improve maintenance and safety.

Lead-acid batteries are the generic battery used by most automobile manufacturers. They are classed as wet cell batteries and are sealed, requiring no maintenance.

They provide power for cranking your engine and are manufactured to meet most temperature requirements. Be careful because lead Pb is extremelly toxic and can cause serious neurological disorders.

Instead of flat plates, each cell consists of two lead plates coated with lead oxide wound around each other in a spiral. They claim to provide more power than traditional flat plate batteries. 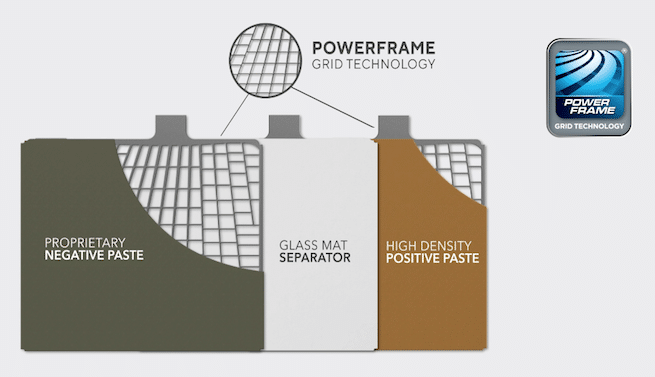 Power-frame grid technology has been available for approximately 15 years and consists of a stamped grid instead of a solid lead plate. Manufacturers claim reductions in corrosion and longer performance.

Lithium-ion batteries are used primarily to power electric cars. Replacing your lead acid battery with a lithium acid battery should be discussed with your dealer to ensure that all specifications for your alternator and electrical systems are met.

Battery Tip: Learn how to disconnect your car battery safely.

Consumers have the following most frequently asked questions regarding batteries for their cars, SUVs, and trucks. Always replace a battery with the model and group size recommended for your vehicle. These FAQ’s include several battery tips as well:

What are the common problems with lead acid batteries?

Consistently overcharging and undercharging a battery can lead to a buildup of lead sulfate pbso over time as well as deliver insufficient power, especially in an undercharging situation. Sealed batteries do not require the addition of water.

However, batteries that are vented do need a water top-up from time to time. Insufficient water can damage the plates irreparably, and too much water can lead to acid dilution, decreasing the power capacity and causing battery failure.

Can you charge auto batteries?

Auto batteries can be charged. If your car is not used for a long period, the electrical system will gradually drain the battery. A trickle charger should be attached to fully charge your battery without overcharging.

Trickle chargers are available that are designed to remain attached for several months without damaging your battery. Your probably need a replacement when the battery light comes on.

Does a car battery store energy?

Car batteries store energy in the form of chemical energy that can be converted to electrical energy as needed. The electrolyte between two lead plates in the battery facilitates the transfer of electrons between a positive and negative terminal.

There are usually six cells, each producing two volts. Batteries cells are also rated in terms of the number of amps they can deliver at 0F for 30 seconds.

What regulates the current of a car battery?

Automotive batteries are designed to deliver current at a constant 12 volts. The amount of current that can be drawn are limited by the load and resistance of the devices attached to the battery, and the capacity of the battery itself.

Batteries are designed to meet continuous current delivery of a specified amount at zero degrees Fahrenheit for 30 seconds.

Automotive batteries should last five years or more with standard use. New batteries for modern cars are typically sealed and require no maintenance. Battery testing may be needed to confirm the proper operation of all cells in the battery, especially as the battery ages.

Batteries can experience deep discharging by the vehicle’s electrical system, even using up the reserve capacity of the battery if not recharged by the charging system.

A battery is the most essential component for you to be able to start the engine of your car.

It is where your car gets the power to start the engine so make sure you that you purchase a reliable brand. with enough amp hour and overall good performance. If you have a dead battery now you know how it works.