Most serpentine belts are found in most late model cars since the 1990s. This serpentine belt is continuous and drives a variety of peripheral engine’s accessories for your vehicle, depending on the model.

For example, the belt to operate your engine accessories includes – alternator/power steering pump, air conditioning compressor, and air pump. There is usually an idler that shapes the route of the belt around your engine as well as providing tension.

What Causes a Serpentine Belt to Produce Noises?

Automobile belts will usually last from 45,000 to 75,000 miles or three to five years. They also have been known to last much longer, depending on the type of driving. When your belt begins to make some noise, it is time to replace the belt. Car owners may hear squeaking noises coming from the engine.

The belt may be slightly loose, causing the belt to slip against the pulleys and cause squealing. Regular auto care suggests conducting a visual inspection. If the belt is beginning to disintegrate, there may be lots of noises generated. Either way, it is time to have the engine looked at by a mechanic, and the belt replaced.

The car’s serpentine belt may also start to deteriorate as it ages causing chirping and other noises. Replace the belt if any of these noises are heard and have all the accessories driven by the belt inspected.

Most people will quickly notice when the serpentine belt breaks. The air conditioning will immediately stop, and fans will blow hot air from the vents. The engine may begin to overheat, and the check engine light should illuminate. Steering will become more difficult since the power steering pump has ceased operation.

Regular car care and inspection of the serpentine belt may reveal missing chunks of rubber or wear and tear of the belt. While it will still operate your vehicle’s various parts, it is just a matter of time before it will fail. Avoid being stranded on the side of the road. Replace the belt immediately and have all the accessories inspected.

Squeal noises coming from the area of the engine is a sure sign that the belt tension is not sufficient (low belt tension). A loose belt, belt stretch or slipping on one or more of the pulleys will cause it to chirp.

Slipping on the pulleys will also accelerate the deterioration of the belt in addition to the annoying squeal noises. It may be as simple as increasing the tension on the belt to fix the issue. Have it inspected and take the necessary corrective action – tighten or replace the belt.

Air conditioners can malfunction in a vehicle for several reasons. It may be low on cooling fluid; a fuse may have blown, the belt that drives the AC unit could have broken, etc.

If all of the other parts are not working as well, it may be a broken serpentine belt. If only the AC is not working, it could be a broken v-belt, fuse, or system failure. Have a mechanic investigate and make appropriate repairs.

The engine warning light or check engine soon light may turn on. Failure of the alternator and the car engine overheating may cause it to turn on or even begin flashing.

If there are separate indicators for power steering and AC units, these warning lights may also illuminate. Have your car’s engine checked immediately, particularly if the lights are flashing. Overheating can cause catastrophic engine damage.

The worst case scenario is an overheated engine when the serpentine belt breaks. The water pump is not pumping water through the engine to cool it, and damage can occur rapidly in an engine that is overheated.

Pull over to the side of the road in a safe location immediately and switch the engine off. Your vehicle may need to be towed and a new belt installed which is much preferred to replacing the motor.

How Many Car Systems Depend on the Serpentine Belt?

Most new vehicles are equipped with air conditioning and power steering. All gasoline and diesel vehicles have water pumps for cooling and an alternator to generate electricity to charge the car battery and run various electrical components in the car.

Replacing the belt is relatively easy in most cars. Loosen the belt tensioner and remove the belt for inspection. If there are any signs of wear, missing or cracked rubber in the grooves, replace the belt with a new one.

Serpentine belts are relatively inexpensive. The price online can be in the range of $20 to $40 depending on make and model. Dealer costs for providing the belt and installation will be more expensive.

However, the mechanic will also ensure that the belt is tensioned correctly and all components are working correctly. For example, a stiff idler can cause premature wear on the belt.

Check your car’s manual or ask your dealer for recommendations on a serpentine belt replacement. They typically will last for forty to seventy thousand miles.

Whenever an oil change is conducted, standard car maintenance by mechanics should include – check wiper blades, lights, belt inspection along with tire condition. If there is any indication of wear and tear, etc. replace it immediately.

Failure of the belt will cause the cooling system, steering system, AC and alternator to stop operating immediately. A vehicle will quickly become disabled and will need to be towed to a auto care shop.

Replacing the belt as soon as it begins showing signs of wear or is making noises avoids the towing fee and the major inconvenience of a disabled car at the side of the road.

If you think you have a wornout belt or if the engine light comes on you should schedule an appointment in the nearest auto care center to see if you need a replacement.

By obtaining a new belt your car will run smoothly and you will see an improvement on the fuel performance. A failing serpentine belt is a sign of la poor job during your cars maintenance inspection. 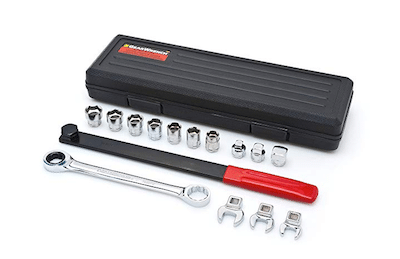 For do it yourself auto repair solutions, a serpentine belt tool kit will make the task much more manageable. Typically, these kits include various size sockets, long bar, and ratcheting wrench. It comes at an affordable price.

Before getting the serpentine belt replaced, either find a routing diagram online and print it for reference or draw a picture of the routing of the belt for reference when installing the new belt.

Difference Between a Serpentine Belt and a Drive Belt

Drive belt configurations are usually found in older model vehicles. They typically will drive one or two components in your car. As a result, depending on the features your vehicle has, e.g., air conditioning, there may be three or more drive belt and pulleys each running one or two components.

They are also referred to as v-belts due to their shape. The v-belt fits into pulleys on each element with V-shaped pulleys. A serpentine belt is flat with several grooves that fit the tensioners on the various components it drives. Idler pulleys are also used in both situations.

Plus, the drive belt is driven from a pulley on the crankshaft and loops around the engine to connect with the AC unit, the water pump, the fan, and the power steering unit.

You should maintain a proper tension on the fan belt. Contact can be increased by adding tension, or the belt will be looped so that there is more of the belt in touch with the pulley.

Serpentine belts run all of the components in your engine using a single belt approach. In a few situations, there can be several belts with different routing around the engine. V-belts will be connected to a maximum of two components in the engine in addition to pulleys.

A serpentine design will have one or two pulleys, while a v-belt design can have at least three or four pulleys, one to drive each belt. Replacing the inner belt requires that all belts are removed to facilitate installation of the worn belt.

The fan belt drives the fan to cool the fluid circulating through the radiator. In late model cars, the fan belt and mechanical fan have been replaced with an electrical fan. Of course, if the alternator fails due to a broken belt, the electrical fan will also fail.

A timing built connects the crankshaft and the camshaft which drives the valves that control air intake and exhaust from the combustion cylinders. It is hidden behind a cover. These belts typically should be replaced every sixty to ninety thousand miles. Failure of the timing belt can cause significant damage to your engine.

Is it Safe to Drive with Squealing Sounds?

Once a belt begins to cause sounds, it is a sure sign that it has started slipping and is starting to show signs of a worn out belt. It is only a matter of time before the belt will break, and the car will be disabled.

A vehicle breakdown on a road trip on a major expressway can be very unsafe compared to a breakdown in your driveway. Either can occur since a serpentine belt could break at any time once it starts to squeal.

Don’t procrastinate, have it looked at immediately. Schedule an appointment for your cars maintenance immediately, also while you are in the auto care shop ask for oil changes prices and a tire quote in case you need to replace a set.

Cars serpentine belts and v-belts are responsible for running critical systems in vehicles. They typically will last for forty-five to seventy-five thousand miles. A noisy belt is usually an indicator of a worn belt that is not properly tensioned.

Once the belt breaks, the AC, the alternator, power steering failure, and water pumps will no longer operate. A car becomes difficult to steer; the engine can overheat, hot air will blow from cooling vents, and the car will only operate as long as the battery charge lasts.

Either if you own a Toyota Camry, Toyota Corolla, or any mid-size car if the engine light comes on it is a possibility that you are going to have a professional take a look at your car as soon as possible. You can purchase the belt online if you have the cars bin number at any engine’s accessories website.

Also, you don’t have to wait until a belt fail catastrophe to replace it. As soon as the belt starts slipping take your vehicle to the nearest car care service station. Make sure the belt is working properly and to replace any wiper blades if necessary.