Your car battery plays a crucial role in your overall performance and reliability. Car batteries provide power to the starter motor, which is necessary to start the engine. It also provides current to the vehicle’s electrical system, including the headlights, radio, and power windows.

A weak or failing battery can cause various problems, such as a slow engine crank, dimming headlights, and reduced performance. In some cases, a weak battery can cause the car not to start, leaving you stranded.

Want to know what color is positive on a car battery? In today’s article, we will talk about the difference between car battery terminals: positive terminal and negative terminal. Without further ado, let’s dive in!

Table of Contents Show
What’s the Difference Between Positive and Negative Terminals?
What’s the Color of the Positive Battery Terminal?
What’s the Color of the Negative Battery Terminal?
Is It Important to Connect the Correct Battery Terminals?
How Can You Properly Hook Up a Car Battery’s Jumper Cables?
FAQs
Q: Which terminal is grounded on a car battery?
Q: Is the car battery terminals’ color coding essential?
Q: What will happen if you connect the polarity of the battery in reverse?
Q: Why should you cut the negative cable or black terminal first?
Conclusion
Related Posts

What’s the Difference Between Positive and Negative Terminals? 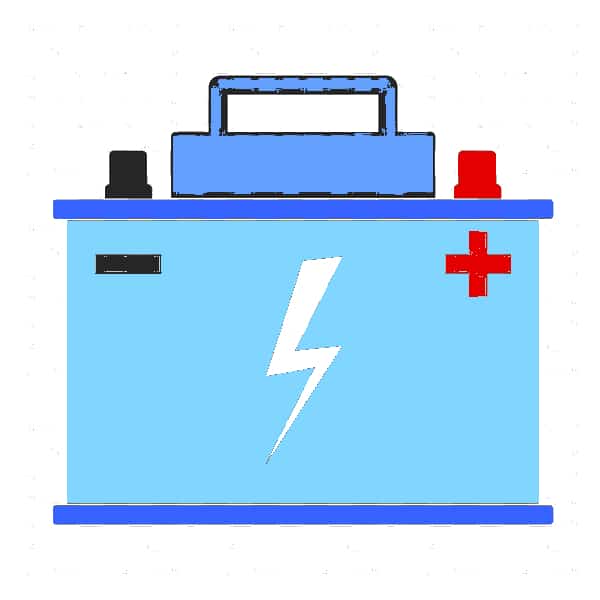 Do not confuse the poles because connecting the cables to the wrong terminals can cause damage to the battery and the car’s electrical systems. It can also be dangerous if you are working on the battery, as the positive side carries a high voltage and can cause injury if you touch it with a tool.

Also, keep the terminals clean and free of corrosion, as corroded terminals can prevent the battery from receiving a charge, causing the car to not start or the battery to die faster.

What’s the Color of the Positive Battery Terminal?

The color of the positive terminal on a car battery is typically RED. The positive terminal is usually identified by a “+” sign or the letter “P” printed on the battery or near the terminal. Some manufacturers may also use colors like orange, yellow, or white.

It is important to check the documentation of the battery or the car’s manual to confirm the color of the positive terminal and make sure you are connecting the cables to the correct terminals. Also, ensure the battery poles are clean, free of corrosion, and securely attached to prevent issues with the battery and the vehicle’s electrical system.

What’s the Color of the Negative Battery Terminal?

The color of the negative terminal on a car battery is typically black. The negative terminal is usually identified by a “-” sign or the letter “N” printed on the battery or near the terminal. Some manufacturers may also use different colors, such as blue or green.

Is It Important to Connect the Correct Battery Terminals?

Yes, connecting the correct battery color coded poles is essential. Connecting the cables to the wrong terminals on a car battery can have several consequences:

Connecting the cables to the wrong terminals can cause an electrical short, increasing the fire risk.

Connecting the cables to the wrong terminals can cause the car to have reduced performance, such as a slow engine crank, dimming headlights, and reduced current to other electrical systems.

Connecting the cables to the wrong terminals can cause damage to the car’s electrical systems, such as the alternator, starter motor, and other components that rely on the battery for energy.

Connecting the cables to the wrong terminals can cause a reverse current flow which can damage the battery’s internal structure, reducing its capacity and lifespan.

How Can You Properly Hook Up a Car Battery’s Jumper Cables?

Hooking up jumper cables to a car battery is a relatively simple process, but it is important to follow the proper steps to ensure a safe and successful jump-start:

Make sure both cars are turned off, and locate the batteries in each car. The battery is usually located near the front of the car, under the hood.

Take the black color cable and attach one end to the good battery’s negative terminal. The other end of the black wire should be attached to a solid metal surface on the car with the dead battery, like an engine block or a bolt on the car’s frame. This will prevent any sparks from occurring near the battery.

Start the car with a good battery and let it run for a few minutes. This will allow the good battery to charge the dead battery.

Try to start the vehicle with a dead battery. When it starts, remove the car battery cables in the reverse order of how you hooked them.

The order of connecting the cables is important, and you should never let the cables touch each other or anything metal while connected. Also, it’s recommended to wear safety goggles and gloves while doing this task.

Q: Which terminal is grounded on a car battery?

The negative (minus sign) terminal on a car battery is typically considered the ground terminal. It is connected to the car’s metal chassis and other vehicle metal parts, which serve as a conductive path to complete the electrical circuit. This is opposed to the positive (+) terminal, which is attached to the car’s electrical system and provides energy to the various components.

It’s important to note that on some older vehicles, the ground connection is made to the engine block or other metal parts of the vehicle and not to the battery’s negative terminal. So, it’s best to consult the vehicle’s manual or a mechanic to confirm the proper connections.

The color coding of new battery terminals is not essential. Still, it is a widely accepted standard in the industry to make it easier for people to identify a car battery’s positive and negative poles.

Color coding is not a legal requirement, and there may be variations in different manufacturers.

It’s important to always check the terminals and consult the vehicle’s manual or a mechanic to confirm the proper connections. Even if the color coding differs, the positive terminal will be labeled with a “+” and the negative one with a “-.”

Q: What will happen if you connect the polarity of the battery in reverse?

If you accidentally connect a battery’s polarity in reverse, it can cause several problems. Here are a few:

It’s important to be extra careful when connecting a battery and to double-check the polarity before making the connections. If you’re unsure, consult the vehicle’s manual or a mechanic.

Q: Why should you cut the negative cable or black terminal first?

When disconnecting the jumper cables from a car battery, it is recommended to disconnect the black or negative side first. This is because the negative clamp is attached to the car’s chassis and other metal parts, which serves as a conductive path to complete the electrical circuit.

If you were to remove the positive cable first, the vehicle’s metal parts would still be hooked to the battery, creating a circuit that could cause a spark. This spark can be dangerous, especially near gasoline or other flammable materials.

Removing the negative cables first will break the circuit and prevent any sparks from occurring. This is especially important if you work in an area with flammable materials such as gasoline or oil.