The airbag light is referred to as the SRS or Supplemental Restraint System. This system provides additional protection to the occupants of a car involved in an accident involving rapid deceleration. A car’s airbags can inflate in milliseconds and deflate in less than a second. They are so fast; occupants may not even realize they activated until after the fact. So, what can cause the airbag light to come on?

Accidents, quick stops involving impacts, and faulty sensors cause the airbags to activate or turn on the SRS light. Many faults can trigger the SRS to illuminate without triggering the airbags. This situation potentially represents an unsafe situation for the occupants since they are not protected in accident situations.

Table of Contents Show
Top Reasons that Can Cause the Airbag Light to Come On
Airbag deactivated
Faulty airbag sensor
Seat belts
Bad airbag clock spring
Need to reset the airbag light
Accidents
Wet airbag control modules
Dead airbag backup battery
Damaged wires
What does the airbag system replacement cost?
How much does it cost to reset the airbag warning light?
Is it safe to drive your vehicle with the SRS light on?
Can low battery cause airbag light come on?
Summary
Related Posts

Top Reasons that Can Cause the Airbag Light to Come On 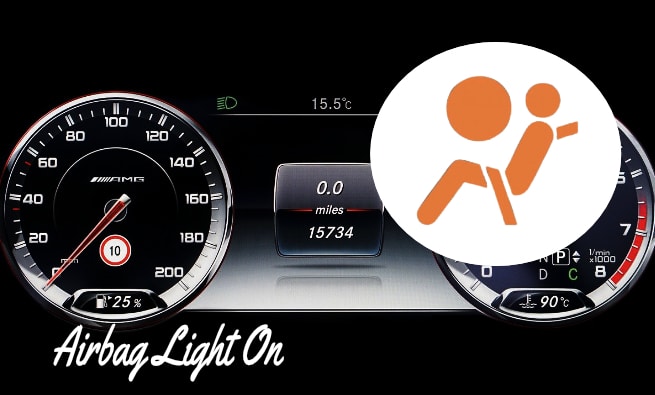 Drivers should avoid ignoring the illuminated SRS airbag light. This light indicates a problem somewhere in the system, and drivers do not have the full protection the complete system can offer. Depending on the trigger, the system may not operate, leaving the occupants unprotected with only the seatbelts to rely on in an accident situation.

Error fault codes are generated and stored in the cars computer module. Mechanics can use a unique computer to connect to the system, read the code, and determine the cause of the malfunction. Replacement of sensors, switches, or airbags may be required to return the system to regular operation.

One of the more than ten airbags in modern vehicles may have become deactivated and will not operate in an accident situation. A faulty connection, wiring, or the airbag unit may have become defective and will need to be replaced. The remaining airbags may deploy in an accident situation; however, you can never be 100% sure. Replacement should be considered immediately to ensure full protection of the occupants of your car.

There are several airbag sensors spread around your vehicle. These sensors detect rapid deceleration that an accident might cause and activate the system. When the system is activated, the airbags will deploy, protecting you and the occupants from serious injury. Faulty airbag sensors are one of the most common reasons the SRS light will illuminate on your dash. Car owners should have the system checked and repaired as needed to ensure everyone’s safety traveling in the vehicle.

The airbag clock spring is located inside your steering wheel. It allows the steering wheel and the airbag to connect with the electrical system providing power to the air bag mechanism. Constantly turning the wheel can cause damage to the clock spring over a period of time. This damage can cause loss of power and a fault, triggering the air bag light on your dash to illuminate. This particular airbag prevents you from smashing into thew wheel in an accident.

Need to reset the airbag light

Accidents or rapid deceleration are detected by airbag mass sensors or airbag roller sensors. Each of them, when activated, will trigger the airbags in your vehicle to deploy. Mass sensors are usually located in the front of the vehicle and measure the impact of an accident. Roller sensors measure the intensity of the impact. Both communicate this information to the ECU (engine control unit), which assesses the need for airbag deployment and activate the airbags. The airbag light on your dash will be illuminated once an airbag has been deployed.

Anytime the airbag control module or ACM gets wet, connections can corrode and / or short out, causing the SRS light to illuminate. Driving through flooded streets, leaving a window down during a heavy rainstorm are potential ways for the airbag module to be exposed to water. The ACM sits under the passenger seat in many cars and is easily exposed to water in either of the situations mentioned.

If the main battery was recently drained for some reason, the airbag back up battery might have also been depleted. The airbag warning light will trigger, and the error usually goes away once both the main and the backup battery have been recharged.

The airbag wiring system in vehicles can be damaged by small accidents, corrosion, and general wear and tear to the vehicle. A poor connection to one of the sensors or to the airbag causes air-bag lights to illuminate. This type of problem is unusual and very difficult to diagnose. If you notice a burning smell, have your car checked by a certified mechanic. Vehicles involved in accidents where the airbags were deployed, damage to the vehicle may also include airbag wiring system damage.

What does the airbag system replacement cost?

The SRS or Supplemental Restraint System triggers airbags to deploy whenever there is significant deceleration, usually caused by accident. Modern vehicles can have ten or more airbags installed. The replacement cost of an airbag varies greatly depending on the make and model of the vehicle you drive. Each airbag can cost as much as $1500 or more to replace. Sensors that become defective due to age or corrosion can cost from $200 to 400 each.

It is really not safe to drive a vehicle with the air bag light illuminated. The system may be defective, placing the occupants of the vehicle in more danger in the event of an accident. Something can damage the wires, and then immediately the car’s airbag light comes on, you need the take the car to a mechanic. There’s a possibility that the airbag won’t deploy, and this could mean the difference between life and death. A new airbag needs to be installed, and the dashboard light then may need to be reset.

How much does it cost to reset the airbag warning light?

If the problem is easily located and is restricted to a faulty sensor, you may get away with a relatively small fee of approximately $200 to $400 per sensor. More complicated issues that are difficult to diagnose can only push the total cost higher.

Replacing airbags that have been deployed for one reason or another can also cost much more. A single airbag replacement can cost as much as $1500. When the air bag light comes on, resetting it can be simple, an experienced mechanic can do this task in an hour or two.

Is it safe to drive your vehicle with the SRS light on?

It is not considered safe to drive a vehicle with the SRS air bag warning light illuminated. The SRS or Supplemental Restraint System is designed to add additional safety features to your car seat belt system. The SRS detects high-speed collisions and triggers the airbags to inflate, providing protection to the occupants in addition to the seat belts. There can be as many as ten or more airbags in modern cars.

A number of different things can trigger the air bag warning light:

Can low battery cause airbag light come on?

A car battery that has been drained for some reason can also drain the airbag backup battery. The SRS light will illuminate and stay on until both batteries have been fully recharged. The check engine light will also illuminate in these situations. In some models, the SRS warning light stays on until the error codes in the ECM has been properly reset.

According to Autocartimes.com, mechanics use a scanning tool to read the error code to assist in diagnosing the issue and remove the code. Once the batteries are fully recharged, and the error code, the SRS light should remain off. If not, there may be additional issues to investigate. Sometimes the safety system could trigger a false warning such as a service airbag appointment.

The airbag light coming on in your dash always worries drivers. There is a potential safety issue since it indicated a problem with the airbag system, and repairs can be very expensive. Error codes are generated coincident with the airbag warning light being turned on.

Using a scanning tool, read these error codes to assess what the actual problem may be. Driving while the airbag light is on robs the occupants of added car safety in accident situations. Always have your vehicle checked by an experienced mechanic anytime the airbag lights are on and avoid driving your vehicle.

Another common reason is a bad clock spring. When this is the issue, the air bag won’t deploy. As soon as you notice this light on, taking your auto to the mechanic is a must. The life of both the driver and passenger can be at risk. Also, make sure you don’t have things under the seat.