Atmospheric pollution is caused by a variety of gases, including carbon dioxide, methane, and nitrogen oxides. Emissions regulations keep getting stricter, and those cars that come with a diesel engine are getting more expensive because of this.

However, nowadays, most modern cars come with a few NOx sensors, which are known as an upstream and downstream sensor that warns us when emissions are not as clean as they should be.

The NOx sensor is a device that measures the amount of NOx (nitrogen oxides) in your car’s exhaust and sends that info to the engine control unit (ECU).

When one of these sensors gets faulty, it usually sends a warning message to display saying that emissions are too high or that there might be a problem with NOx emissions.

If one of those sensors starts giving false readings or does not work at all, the lambda probe might pick up those false signals instead and send the wrong values to ECU.

What are NOx Sensors? 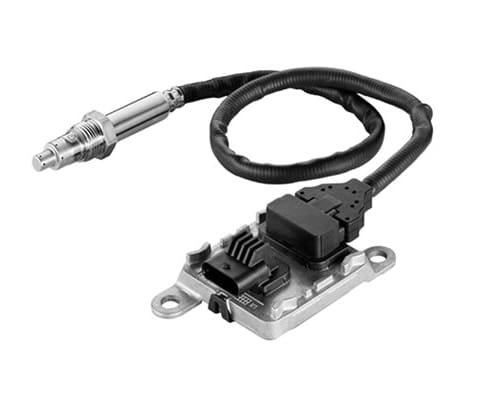 NOx sensors are used to monitor how much NOx is in the exhaust gas. The level of NOx in the exhaust gasses indicates whether or not there is enough oxygen present during combustion, helping the catalytic converter work efficiently.

The NOx sensors in diesel vehicles are responsible for reducing harmful exhaust gases and protecting the environment. This sensor will trigger the engine warning lights on the dash when it fails. Plus, this may be accompanied by loss of power, poor acceleration, and reduced fuel economy.

The components installed on a vehicle can vary depending on its brand and model. The old typical standard vehicle includes a turbocharger, a DPF and an SCR catalyst, as well as a NOx sensor upstream from the catalyst.

Now an upstream and downstream sensor is commonly found on modern vehicles, and it sends all the info about the emission to the ECU, which in turn calculates how much fuel should be injected into the cylinder.

The two sensors can be found on your vehicle’s exhaust pipe. These devices function differently and provide different benefits.

In this setup, the first sensor is positioned near the turbo downpipe in this assembly, which monitors engine-output NOx. And the second sensor monitors the NOx emissions from the SCR catalyst, where it can get an accurate urea injection reading.

What do nitrogen oxide sensors do?

The function of a NOx sensor is to detect harmful nitrogen oxides that come from the combustion environment within the engine. It is a simple electrochemical device, which means it contains a metal electrode and a chemical applied to it.

When NOx enters the sensor through a platinum wire, it changes the electrical resistance of the sensor’s surface. The signal sent by this electronic nose tells your car computer how much NOx there is in your exhaust so that the fuel to air ratio can be adjusted accordingly to keep emissions down.

How does a nitrogen Oxide Sensor work?

Inside every catalytic converter are microscopic honeycomb structures coated with precious metals like palladium or platinum, which act as filters for certain gases, including nitrogen oxides (NOx).

Like any filter, these materials eventually get clogged up with contaminants over time. This happens faster when you drive in stop/start traffic with constant cycling of the engine on and off.

The NOx sensor constantly measures how much oxygen is being let through by the converter so that the computer can adjust the air to fuel ratio to keep emissions as clean as possible. In short, it’s a very important part of a car’s self-diagnostics system.

However, NOx sensors can’t tell the difference between elevated NOx levels and ammonia. One way of solving this problem is by performing a regen which will clear any ammonia out from your exhaust system. If this doesn’t work, then try replacing or cleaning the catalytic converter.

The NOx sensors are linked to the SCR system, which means that there will also be emission and general SCR system faults. This only adds to a whole new list of other potential issues that can come up.

Symptoms of a Faulty NOx Sensor 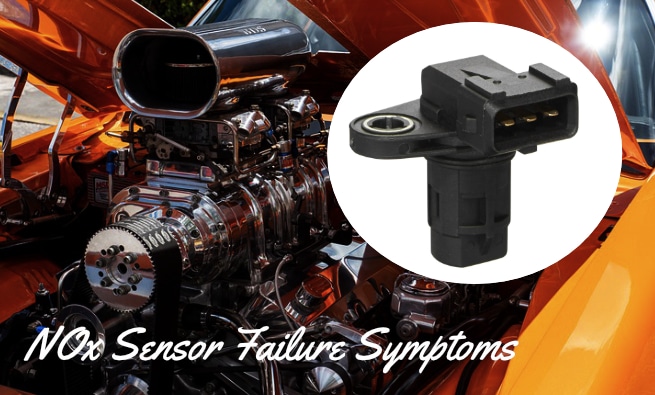 Several symptoms indicate your NOx sensor may be faulty. Some of these include the following: hard start or rough idle, high fuel consumption rates, misfires, stalling, and uneven acceleration with no apparent cause.

If you notice any of these problems, have your vehicle checked for codes related to your NOX sensor by a mechanic. Here are the top 5 most common NOx sensor issues:

Check engine warning light on the dashboard is the most common reason why car owners are led to believe their NOx sensors are faulty. This light is usually triggered by problems with electronic components of your car, including emission control components, which include the NOx sensor.

If your car’s NOx sensor is faulty, you will notice an increase in fuel consumption. This usually happens after the engine acquires higher pressure within its cylinders to compensate for the lack of proper sensors readings.

When a NOx sensor fails, it sends the wrong information to the ECU, which results in too much fuel being injected into the cylinder. Your car will start to use more gas than usual to keep its engine running smoothly, and it goes into limp mode by limiting its RPM.

A sudden misfire may be due to a faulty NOx sensor. This usually happens when the o2 level in the exhaust is below the minimum threshold level for proper fuel combustion.

NOX sensors are one of the most costly components in diesel exhaust systems. This is because they contain precious metals such as platinum which helps to reduce toxic nitrogen oxide (NO) emission.s

A bad NOx sensor will lead to higher emission rates which in turn damages the catalyst and eventually reduces its ability to manage harmful gases. This results in a buildup of soot which becomes difficult to remove without changing the complete system (including the exhaust).

Uneven acceleration is another symptom that might indicate a damaged NOx sensor. This is because the motor will use additional fuel to compensate for insufficient sensors readings. In turn, your car accelerates unevenly and causes jerking when you press on the gas pedal.

Spending a few dollars to get a new nitrogen oxide sensor will get you a better reading of the NOx levels in the SCR system of your vehicle as well. These SCR components can also cause a car to jerk when accelerating and lead to other failure issues.

Starts and then stalls out or has difficulty staying started at low speeds (such as when making turns). Cars with this problem typically idle slowly and may stall while idling but will re-start without too much difficulty.

This is typically related to internal engine problems such as carbon buildup in the combustion chamber, which requires maintenance or repair. However, it can also be caused by external NOx sensor problems that interfere with your car’s ability to measure the amount of oxygen in the exhaust.

You can try cleaning your NOx sensor as a temporary repair with a fuel injector cleaner, as long as you have the required tools and follow the previous video procedure carefully. If your vehicle continues to run a rich fuel mixture, then the NOx sensor requires replacement.

The cost of replacing your NOx sensor will depend on whether it’s brand new, aftermarket, or original equipment. The replacement cost of a NOx sensor varies according to your car’s make and model but typically ranges from $150 – $300.

Can a broken NOx Sensor be repaired?

A new NOx sensor will work hard to protect the motor if too much DEF is being inserted into the exhaust, preventing the SCR brick from becoming saturated with ammonia and forcing some of it will exit the SCR assembly.

Sensor replacement may assist the pump in maintaining constant flow from the DEF tank to the DEF injector, resulting in peak performance throughout vehicle operation.

Best thing is to try to replace it with a new one and not to fix it to address any SRC codes concerning the DEF quality.

Driving your car with a broken NOx sensor is not recommended, as it can cause further damage to other parts of your emission system. Unrepaired faults may lead to reduced fuel economy, increased emissions, and lead to other problems that can be pricey to repair.

Although refurbished NOx sensors are much cheaper than new ones, their reliability is still suspect since their true condition is unknown. They may have been repaired or tested improperly, which can lead to more expensive problems in the future if not replaced right away.