There are several variables to consider. Size of the battery, the car battery charger being used, and do you need the battery fully charged or just enough to be able to start your engine. So, how long does it take to charge a car battery?

Typically, a standard car battery can keep enough to start your engine within an hour. However, full charging can take up to 10 hours. Many drivers will use a jump starter technique to get the engine running and then drive their vehicle to charge the battery.

How Long Does It Take To Charge A Car Battery While Driving?

Engines operating at higher RPM’s deliver higher amounts of electrical energy needed to charge a discharged battery. While a battery will charge while the engine is idling, it may take some time to completely charge your car battery.

Driving a car for 30 minutes or more should be sufficient to charge a car battery enough to restart the engine easily. One exception to the above is if your electrical system is under heavy load.

For example, with the headlights on, the electric fan operating, the radio, high powered speakers, and other custom installed items drawing power, your battery may be draining even with the engine idling.

This may be considered an extreme situation by most readers. However, the point is that it requires additional time for the battery to recharge while under heavy electrical load.

Experts suggest that a car usage cycle should include driving a car at least once a week to fully recharge the battery and to lubricate the various engine and transmission components.

Even when the car is not running, batteries will slowly discharge. Thirty minutes of operation fully recharges the battery and helps in maintaining your battery at an optimum level.

The initial charge time it takes to completely charge your car battery after a full discharge can vary a great deal. Driving the car for 30 minutes on the highway is usually sufficient.

What options do I have if nothing works?

Confirmed that the battery is good and the connections are tight. Use one or all of the options to recharge the battery:

How Long Does It Take To Charge A Dead Car Battery?

Dead car batteries can be recharged in less than an hour or as long as a full day, depending on the amperage of the charger. Some batteries fail and cannot be recharged at all.

A car battery that has been discharged may still be recharged if it has not been damaged by age or by overheating from rapid discharging or previous charging cycles. Damaged batteries must be replaced.

How long does it take to Charge a Car Battery with a Trickle Charger?

Use trickle chargers to maintain your battery completely charged over a long period when your car is not being used. All batteries slowly discharge whether they are connected to your vehicle or not. Also, electronics on your car will draw a small amount of electrical power even while not in use.

What car battery charger should I use?

Is it for emergencies to recharge a dead battery? Is your car going to be parked for a long time, and you want to avoid fully discharging the battery? What charging rate do you want to use to charge your battery?

Trickle chargers can be connected to maintain a battery at a fully charged state when a car is left unused for long periods. Low amperage battery chargers can be used when you are not in a hurry and can afford a few hours to recharge the battery.

Higher amperage battery chargers are preferred when you need to quickly charge a battery and be on your way with your car. Decide what your needs are to charge my car battery before making a purchase.

How Long Does It Take To Charge A Car Battery With A 12-Volt Charger? 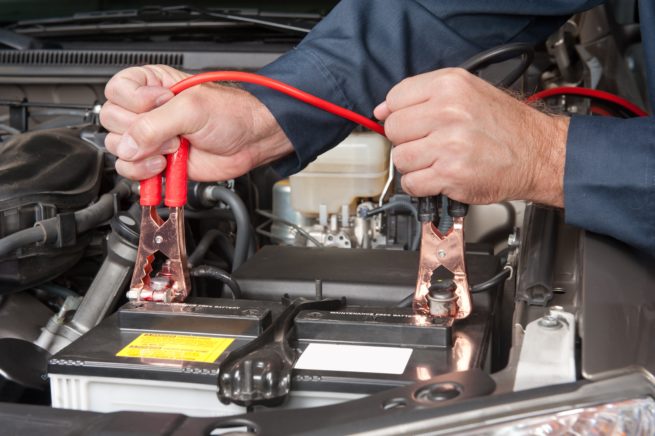 How Long Does it Take to Charge a Car Battery at 40 amps?

The amperage rating of the battery determines the time needed to charge the battery. These fast chargers can damage your battery if left connected for an extended period.

Smart chargers detect a completely charged battery, lowering the amperage down to trickle charging levels or even shutting off completely.

How Long Does it Take to Charge a Car Battery at 12 amps?

Car batteries are manufactured to deliver a variety of amp-hour capabilities. For example, a 48 amp-hour deep cycle battery will take approximately 4 hours to reach a fully charged state.

Again, consumers should consider purchasing a smart charger that reduces the current delivered once the battery is fully charged to avoid long term damage to the battery.

How Long Does it Take to Charge a Car Battery at 10 amps?

There are different types of batteries on the market, and each of these may take less or more time to charge fully. Always purchase a smart charger that reduces the current delivered to the battery once the car battery is charged in full.

At 4-amps, a battery charger can take up to 12 hours to fully charge our 48-amp deep cycle battery. Deep cycle batteries deliver energy for longer periods but have less instant energy. Starting batteries provide higher bursts of energy suitable for engine cranking. Many midsize cars use dual-purpose batteries, which are optimized for both situations.

Can a completely dead battery be recharged?

We all know the feeling that cranking produces when you try to start your car. That’s is why we encourage our readers to make sure they get a portable car jump starter for those situations. Most of the time, it is a problem with a faulty battery that can cause this.

The alternator is not designed to charge a dead battery, but another amp charger can recharge it as long as the battery is not defective. Even with a low amp charger, you can expect to recharge a faulty battery within 24 hours if the time that is was connected.

There is a large variety of battery chargers. However, they fall into three main categories: Linear chargers, multi-stage chargers, and trickle chargers.

Trickle chargers are often used to prevent a battery from fully discharging over a long period, although trickle chargers cannot support batteries under load. Linear battery chargers are among the least expensive due to their small size and straightforward design.

A multi-stage charger can safely charge a car battery that has been fully discharged and maintain it completely charged, similar to a trickle charger. Most can sense the condition of the battery and apply a voltage and current appropriately to prevent damage to the battery.

Multi-stage chargers detect the condition of the battery and then deliver the appropriate voltage and current to charge the battery. The first stage is the bulk stage and delivers as much current as possible.

Trickle chargers maintain the battery at a completely charged level. The trickle charger can meet a rate equal to the self-discharge rate of a fully charged battery.

However, it cannot keep a car battery completely charged if it is under load. Trickle chargers are typically used when your car is not used for an extended period.

Basically, the car battery charger that you choose will then determine how long it would take to charge a car battery. The precise number of how long does it take will most likely be a wide range of time.

We always recommend replacing a dead battery if it is giving you problems to start your car. So, how long does it really take to charge a car battery with a low amp charger? A car battery can take up to 24 hours to charge in full sometimes.

Make sure you have enough time in your hands if you decide to charge your car battery instead of replacing it. Only if the body shop has a 40 amp charger you can expect to receive the car battery within an hour of charging.

Now you know that the charging time can be very long. Just expect to wait between 1 hour and 24 hours of charging time as the standard range. The amp charger will determine how long your wait time is.