Modern car engines have been much more complex in recent years. They depend on a series of sensors and computers to monitor and calculate how the engine should operate.

These computers manage everything from fuel economy to acceleration and emission control. They also ensure that your engine remains healthy and operating effectively.

While the sensors are collecting information and relaying this information to the car’s computers, the computers are managing fuel injector timing and amounts, air intake, and a host of other items.

In addition, the car’s computers report to the dash on your vehicle whenever there is an error code generated. This is typically the check engine light. All of these parameters are used to keep your car’s engine running smoothly, and these sensors are integral to its operation.

The crankshaft position sensor reports information about the speed and position of the crankshaft to the computer. In this article, we may use the terms PCM (Power Train Module), which is a single computer managing the functions of the engine and the transmission.

What are crankshaft position sensors? 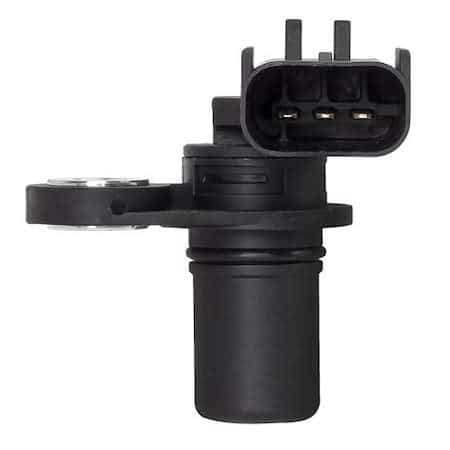 The crankshaft position sensor monitors the exact position of the engine crankshaft and the rotation speed of the crankshaft. Your engine will not start if the sensor is not operating properly. Manufacturers install the sensors in different locations.

Some are mounted close to the main pulley, while others are installed near the transmission bell housing. The engine cylinder block is another favorite location. The sensor provides data to the ECM, which in turn uses this information to control the ignition timing for both the spark and the fuel injectors.

With no crankshaft signal, the fuel injection timing might not work, and there will be no spark, and the engine will not start, or the engine will shut off completely and cannot be restarted until repairs are made.

Crankshaft position sensors can fail slowly, causing intermittent problems or completely. A complete failure causes the engine to stop working. An intermittent failure may cause a long crank time to start it, it stalls randomly, or the RPM gauge behaves randomly.

This data is used by the ECM or PCM, depending on how your engine is equipped to initiate the fuel injectors to spray gas into the motor and to generate a spark to ignite the mixture at the correct time for each cylinder as the piston reaches the correct position.

Note that the camshaft controls the opening and closing of the valves to inject gasoline and air and to exhaust the spent gases.

A faulty crankshaft position sensor can cause several problems, including not being able to start the engine. If it is intermittent, you may notice some or all of the following symptoms. Car owners should have the situation investigated immediately and repaired before the engine fails to run at all.

#1 Engine misfires or starts to vibrate

A failed crankshaft position sensor is no longer sending information to the ECM, and the ECM may cause the fuel injectors to open at the wrong time and the spark plugs to fire at the wrong time for one or more cylinders.

You may hear your engine backfiring, or there is a lot of vibration to the engine, which can often be felt on the steering wheel. Bad spark plugs and bad wiring can also cause these problems. Once you investigate and rule out the spark plugs, check the connections.

If the check engine light illuminates, the ECM has identified a problem with your engine and registered an error code which can be read by a mechanic with the appropriate equipment. The OBD-II code is P0335 and indicates that a diagnostic trouble code has been recorded and indicates a “Crankshaft Position A Circuit Malfunction.”

The ECM initiates this code when it is not able to detect a signal from this device. This could indicate a faulty sensor or faulty wires, or a faulty connector. Check the connections and the condition of the wiring harness. If there is nothing unusual, the stock sensor on your vehicle has likely failed.

A crankshaft position sensor that is beginning to fail is sending a signal to the ECM intermittently. When the signal cuts out, the fuel injectors and spark plugs do not do their job because the ECM does not have the information it needs to send an actuating signal to them. With no spark, the engine will stall.

Occasionally in this situation, the engine may also misfire if the timing of a spark is off on one or more cylinders. Intermittent stalling on the road can be dangerous, especially in high traffic situations. Have your vehicle serviced by a mechanic as soon as possible.

Poor gas mileage and engine performance can also occur as your crankshaft position sensor begins to fail. With no signal from the sensor or intermittent signals, the engine performance will suffer. Less power is generated and transferred to the transmission.

You may not be able to maintain speed on the road or be unable to accelerate. In addition, gasoline may be injected into the cylinders and exhausted into the environment when the spark plugs do not generate a spark to cause combustion. Once the position sensor begins to fail, these issues will only increase until your engine fails to start.

#5 The vehicle won’t start or cranks

When a crankshaft position sensor has failed, the ECM has no information to tell it what position the cranks shaft is in. The ECM does not cause the injectors to inject gasoline into the cylinder and does not cause the spark plugs to fire. As a result, the vehicle will not start when attempting to start it.

Cranking engines too much can also drain the battery. After a short period, there may not be sufficient power left in the battery to crank the engine. Have your car’s engine checked by a mechanic before the battery power is too low.

This can be a dangerous situation, especially on busy high-speed roadways. The check engine light coming on indicates there is a problem with the engine. Request a mechanic to read the code generated by the ECM and make the repairs needed.

Code OBD-II P0335 indicates a problem with the crankshaft position sensor or the wires connecting the device to the ECM.

#7 Problems with the engine control unit

The engine control unit is a critical component and manages the operation of your car’s engine. The ECM receives inputs from many important sensors and uses this information to manage fuel injection and spark delivery at the correct time to meet the power demands of the driver.

The ECM also generates error codes and causes the check engine light to illuminate whenever there is an indication of a failure by one of the components it needs to perform its function.

While an ECM can fail or have intermittent problems, it is far more common that one or more sensors fail to make it impossible for the ECM to perform as designed. The ECM will generate an error code and an illuminated check engine light to notify the driver they should have their vehicle serviced.

Once you have this information, the ECM can calculate the location of each piston and determine the exact time to inject fuel and air into the engine cylinders, and then fire the spark plugs to ignite the combustion of the mixture.

This sensor is located near the crankshaft and senses the position using a reluctor with one or two teeth missing to indicate the position of the crankshaft. Engines can have two sensors. Crankshaft sensors can fail due to excessive overheating and electrical problems.

What will a faulty crankshaft position sensor do?

A failed sensor does not report the RPM and position to the ECM. As a result, the ECM has no idea when to inject gasoline into the cylinders and when to fire the spark plugs. Unburnt gasoline can be ejected into the environment. The spark may ignite the mixture at the wrong time cause misfires and backfires. Your vehicle may vibrate, provide poor acceleration or use more gasoline.

A failing sensor may work part of the time and then fail, causing jerking of the motor, surging, and situations with less power. Corroded wiring harnesses and connectors can also cause these issues.

How much does it cost to replace a crank sensor?

In most cases, it is easy to replace the stock sensor unless there is built-up corrosion on the bolt holding it in place. In many cars, the crank sensor is difficult to reach, but once you loosen the bolt securing the stock sensor, they are easy to remove and install the new one.

Can you drive with a bad crankshaft position sensor?

If you are experiencing severe engine problems, such as poor starting, failure to accelerate, or stalling, the best thing you can do is have your vehicle taken to the repair shop. A mechanic can check the error codes reported by the ECM and have the crankshaft sensor replaced.

These engine problems can make the car unsafe to drive on the road and also cause significant damage to the motor, which can become very expensive. Intermittent problems are the first indication that your crankshaft position indicator is beginning to fail. Depending on the symptom, the vehicle can be driven.

However, if the symptoms are increasing in severity and frequency, such as stalling or having difficulty accelerating, these conditions could create dangerous situations on the road. For example, a stalled engine on the freeway can cause serious accidents.

Should I replace or repair your vehicle’s motor as soon as possible? Once you have any of the symptoms of a bad crankshaft position sensor, you should think about replacing it ASAP. It plays an important role in monitoring most vehicle engines, especially in modern cars.

The crankshaft is the source of rotational energy for the internal combustion engine. The crank sensor provides information to the Engine Control Module about the exact position of the crankshaft as it rotates inside the engine and also the speed of rotation or RPM.

The ECM uses this information to control when the injectors inject gasoline into the engine cylinders and when to deliver a spark from the spark plugs to ignite the mixture. This problem can lead to reduced gas mileage and intermittent stalling.

Without this information, the ECM may not cause the fuel injection system to produce the spark to be initiated. Poor engine performance is the result. The vehicle may stall, may not start, gas performance may suffer, and you may not be able to accelerate. The motor may also have vibrations or uneven acceleration if one or more cylinders are not firing at the proper time.

Car owners are urged to have this condition repaired before serious damage to their engine occurs. The dashboard light is illuminated, and an error code is generated. If the crankshaft position sensors have failed, code OBD-II P0335 will be indicated.

There are tools and manuals available for those consumers if they are interested in diagnosing the problem and doing their repairs. Once the crankshaft sensor is fixed, your car’s engine should run smoothly.

Lastly, once it is replaced, you won’t have problems with vibrations or even issues starting your vehicle. You can visit a local shop, and with the engine size and the vehicle’s VIN number, you can get a replacement one. You can then install it yourself, or you can have a mechanic change it for you. Check our blog for advice on other parts.