The EGR or exhaust gas recirculation valve recirculates exhaust gases into the manifold to be combined with the air-fuel mixture. This process reduces pollution, particularly NOx (Nitrogen Oxide) and other chemicals produced during combustion. It is part of your car’s emission system. But, how do we recognize the symptoms of a bad EGR valve?

The EGR valve reduces NOx emissions and improves fuel system efficiency as well. Several symptoms point in the direction of a defective EGR, however, car owners should have their vehicle’s engine checked whenever the check engine light comes on, and the error codes indicate a defective EGR. Check the EGR valve electrical connection, vacuum lines are intact, a vacuum leak, and if there is significant carbon buildup.

The EGR can become dirty, and carbon deposits may build up, impacting the flow of gases. The EGR can be cleaned or a new valve installed. There are digital EGR and Vacuum controlled EGR’s.

10 Most Common Symptoms of a Bad EGR Valve 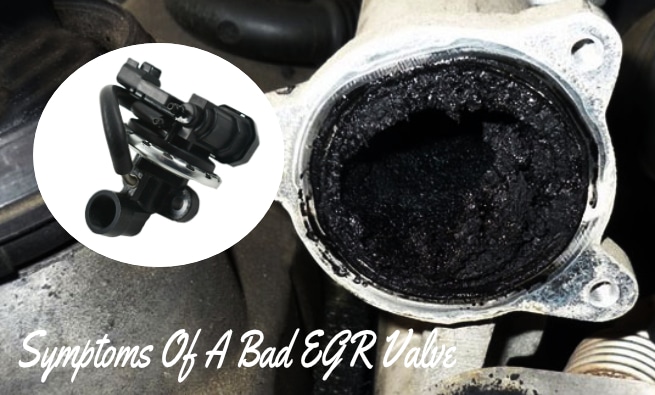 Several EGR valve symptoms of bad valves point to a faulty EGR valve. Individually these common signs may suggest several different problems. However, when combined, suggest the recirculation EGR system is failing or has failed.

Often the ECM will detect failing electrical connections, too much or too little exhaust airflow into the manifold. When this occurs, check if the engine warning light is illuminated and if an error code is generated that relates to the EGR. More detail follows.

1. Car produces a smell of fuel

If you are smelling fuel, it can mean that the engine is not completely burning all of the fuel, and the EGR valve is not working properly. The engine may consume more fuel and release hydrocarbons from the tailpipe. Hydrocarbon, gasoline, and the NOx (Nitrogen Oxide) is a dangerous mix of chemicals for human health.

An EGR valve stuck in the open position allows too much-recirculated gases into the combustion chamber affecting the fuel to air mixture. Stalling in traffic or at home can be very frustrating and even dangerous. Essentially the mixture of gases is not sufficient to keep the engine running.

Similar to car stalling, the EGR valve may be stuck partially or even fully open, allowing too many recirculated gases to enter the combustion chamber. The air-fuel mixture is off, and the engine runs roughly, as it tries to compensate for too much air vs. fuel.

Engine performance may also begin to worsen, especially at low speeds. If the EGR valve is stuck in the open position, too much exhaust gas is entering the engine combustion chambers causing the air-fuel mixture to be off. Your car’s engine may deliver less power in this situation.

Fuel consumption also increases since the ECM increases fuel pressure to compensate for the lack of power and a lean fuel to air mixture. An open EGR valve causes more of the exhaust gases to enter into the combustion chambers, which also has the impact of causing low engine temperature contributing to less efficient burning of the fuel.

If the EGR valve is stuck in the closed position, the temperature inside the combustion chamber will be too high. Hot combustion chambers can cause the fuel to ignite too soon when an engine is at low RPM, causing a knocking sound since the explosion of gases occurs before the pistons are in the correct position.

Poor acceleration may also occur with a lean fuel to air mixture, caused by an open EGR or a closed EGR and the combustion taking place too soon. Combine it with knocking and increased emissions, and your car’s engine cannot produce the power needed to accelerate at expected levels.

The oxygen sensor measures the amount of oxygen entering the engine based on the temperature, altitude, pressure, load on the engine, and the engine temperature. If the EGR valve is failing or the oxygen sensor is failing, your engine may exhibit many of the same signs. The ECM will report an error code to point your mechanic in the right direction and turn on the check engine light.

With a potentially bad oxygen sensor or a failed EGR valve, fuel is not burned properly, and Nitrogen Oxide is being exhausted into the air. These extra emissions will cause your engine to fail an emissions test and potentially attract fines if the repairs are not made.

What is an exhaust gas recirculation (EGR) valve?

The purpose of the EGR valve is to reduce emissions, specifically Nitrogen Oxide. The EGR valve recirculates emissions from the engine back into the combustion chamber for additional combustion and reducing the number of emissions into the atmosphere. There are vacuum and electronically controlled EGR valves.

An EGR valve stuck open causes the flow of exhaust gases to be recirculated back into the combustion chamber. This process reduces the temperature of the engine and causing a lean air-fuel mixture. A stuck closed EGR valve does not recirculate any gases to the engine, allowing everything to be exhausted into the atmosphere and increasing emissions.

There are 13 EGR fault codes. However, the most common fault codes are the three listed below, while the other codes indicate circuit, position sensor, and solenoid malfunctions:

What is the EGR valve replacement costs?

The cost to replace the EGR valve depends on the make and vehicle models; however, the cost should vary between$150 to $600, including parts and labor. If you are the do it yourself type, a new vehicles EGR material cost only may cost from $70 to $500, depending on the make and model of your engine. If you changed the EGR valve and still have the same problems, check your fuel pump and for a clogged fuel filter caused by bad fuel.

Can an EGR valve be cleaned?

Clogged EGR valves can be cleaned. However, safety steps should be followed. Wear acid-resistant gloves and safety glasses to protect yourself from the EGR valve cleaner you spray onto the valve. Use a pipe cleaning brush to remove all carbon deposits from the valve. Be careful to avoid damaging plastic and electronic parts in the process.

Occasionally the EGR tube breaks or maybe loose and will rattle from vibration. The vibration may change depending on engine RPM or when accelerating. Inspect the EGR valve to make sure it is not broken and held securely in place inside the engine compartment.

Bad EGR valves can cause poor fuel efficiency, increased pollution, and cause your car to stall, idle roughly, and even poor acceleration. If the EGR is stucked, it is better to replace it. They are relatively inexpensive to replace. The EGR valve control solenoid can also be causing the typical car stalling problem.

Remember that in older car models, the exhaust gas recirculation (EGR) system operates the vehicles EGR valves with a vacuum hose that connects to the throttle body. Newer models are equipped with an electronic vacuum-controlled EGR that does a better job of communicating to the car’s computer thru the EGR sensor.

Car owners can check for carbon deposits and either clean the EGR valve or replace it. They typically last 10 years or until carbon deposits have built up to the point where engine performance is affected. Now you understand the main symptoms of a bad or failing exhaust gas recirculation EGR valve.