Burned engine oil, an oil leak, running rich, poor engine performance, and high oil consumption can cause increased carbon deposits. Catalytic converters are expensive to replace, and many drivers want to know if they can clean catalytic converters instead of replacing them.

What is a catalytic converter, and what does it do? 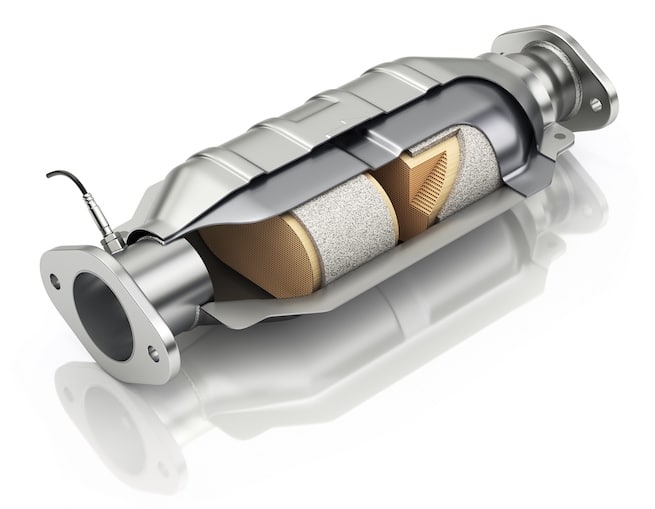 The converter gets hot and uses the heat to break the nitrogen and oxygen molecules apart, reducing the amount of smog that is produced by our vehicles. A poorly maintained engine, burning a too rich fuel mixture, or burning oil can cause a catalytic converter to clog.

A catalytic converter can be quite expensive to replace, sometimes more than $1000 to replace. Confirming a faulty converter vs. bad oxygen sensors, which is much less expensive, can make a huge difference in your repair bills.

Can you use a catalytic converter cleaner?

PO420 error code generated by the ECM indicates catalyst system efficiency is below the threshold. It may be plugged with carbon deposits, or parts of the mesh inside the converter have broken. If portions of the interior mesh have broken or collapsed, the converter must be replaced.

There are a variety of claims about using soap and water, lacquer thinner, and sodium hydroxide for catalytic converter cleaning of carbon deposits that have built up inside the unit. There are numerous online videos making claims and others claiming to debunk these as myths. The following provides a little more detail about these different products and whether they work or not if your catalytic converter is clogged.

What are the best catalytic converter cleaners?

The Chevron Techron brand stands out when it comes to fuel system cleaners. Most people bought this product to clean the fuel system and experienced positive results.

Overall this cleaner helps to eliminate those rotten egg smells coming out of the exhausts due to clogged catalytic converters. For these folks, the cleaner seemed to do the job, and the check engine light and error code cleared.

A common message appears to be that anyone who suspects their catalytic converter is going bad should not wait before taking action. A converter with a significant buildup of carbon or one that has broken parts inside cannot be saved.

How to clean a catalytic converter without removing it

As cars age and catalytic converters gradually fill with carbon deposits, they become less and less capable of doing the job they were designed to do. Failing to address the problem early often lowers the efficiency of various cleaning products available on the market.

There are a multitude of products on the market claiming to clean fuel systems and catalytic converters. Based on reviews, many of these products work well, cleaning the various components of the fuel delivery and combustion system, including the catalytic converter, without the need to remove it.

Here are some of the things you will need to clean your catalytic converter:

There are additional methods that are used to clean the converter before it is too damaged. However, it will need to be removed.

Other possible methods of cleaning your catalytic converters

Sodium hydroxide (Vinegar is used to neutralize sodium hydroxide), soap and water, lacquer thinner, acetone, and vinegar are the subject of various online cleaning method reviews. In some reviews, there are claims of successfully cleaning catalytic converters, while in others, they are shown to be myths.

Sometimes it is worth a try if you can avoid spending anywhere from $1000 to $2500. Each of the following solutions assumes removing the catalytic converter. You may need to use penetrating oil to loosen the bolts to remove the converter.

#1 Cleaning the catalytic converter with soap and water

Fully immersing the catalytic converter in a solution of regular soap and water may remove some of the dirt and grime from the unit. The unit must be fully immersed and soak the unit for several hours. Once and a while, agitate the water by swirling the unit and also lifting it up and down. You may notice some material removal. However, based on demonstrations, soap and water are not very effective.

Once you remove the unit from the soap and water, use a pressure washer to remove the soap and any loose material, and then immerse the converter in acetone. Acetone combines with water droplets that adhere to the inside of the converter and dry quickly. Allow it to dry before reinstalling and observe trouble codes, temperature measurements, and O2 sensor readings to confirm this approach made a difference.

#2 Cleaning the catalytic converter with vinegar

Vinegar is an acidic product and will dissolve various salts, including carbon buildup. Once the catalytic converter is removed, fully immerse it in a vinegar solution and allow it to sit in the solution for a few hours. You may want to agitate the converter a few times to ensure that the vinegar penetrates the converter’s interior.

Remove the converter from the solution, allow the vinegar to evaporate, use a pressure washer to clean it further, dry the converter and then reinstall the converter. Check for error code clearance, check inlet and outlet temperatures, and the readings from the O2 sensors to confirm if this approach helped. Test results from various online forums indicate that vinegar may help a mildly clogged converter but has little effect on one that is fully clogged.

While it is not expected to cause any damage to the engine and fuel system, anyone following this approach is doing so at their own risk. We do not recommend putting lacquer thinner in your gas tank.

However, there are several online videos suggesting lacquer thinner works as a cleaner, while others debunk this approach as a myth and has no effect for a severely clogged catalytic converter but may help one that is mildly clogged.

What are some of the symptoms of a bad catalytic converter?

There are numerous symptoms of a bad catalytic converter. For example:

Arrange for the converter temperatures for the input and the output to be checked, as well as the O2 sensors. These readings can help pinpoint whether it is a sensor or catalytic converter problem.

Can I drive with a clogged catalytic converter?

Drivers can continue driving their car with a bad catalytic converter, however as it becomes less and less efficient several things begin to occur. Harmful emissions are going to increase since the converter is not doing its job, and your car will not pass an emission test.

The check engine light will probably illuminate, indicating that there is an error code generated indicating that the O2 sensors are not reading concentrations within expected limits. As the converter becomes clogged, the engine performance declines and may use extra fuel due to poor air-fuel mixtures as the ECM attempts to compensate based on sensor readings.

How long does a catalytic converter typically last?

On most modern vehicles, the catalytic converter should last approximately 100,000 miles, depending on how well maintained the car is, i.e., burning the correct fuel and whether the converter was physically damaged. With average driving of 10,000 miles per year of a well-maintained vehicle, you should anticipate 10 years before needing to replace the converter.

Roadside debris can damage many things on the underside of a vehicle, including the catalytic converter. There is a shield to protect it. However, occasionally a hard knock can severely damage the unit. Corrosion at the joints from road salt can also erode the connections to the pipes from the engine and the muffler.

What is the average replacement cost for a catalytic converter?

The cost to replace a catalytic converter depends on the make and model of the vehicle. Some vehicles have two converters, and most mechanics will recommend the replacement of both units since the car is already on a hoist and the exhaust system is dismantled.

The cost can vary a great deal. Including parts and labor, the cost may vary from $1000 to $2500. By the time your converter needs replacement, this expense can be more than the car is worth. Before replacing the converter, evaluate how many other repairs are going to be needed and whether you should purchase another vehicle instead.

A catalytic converter in a well-maintained engine should last approximately 100,000 miles or more. They are expensive to replace, some approaching $2500 to replace. Regular cleaning of mildly clogged catalytic converters may help extend their life. However, owners need to be prepared to use commercial cleaners or remove the converter and clean the units immersed in various solutions.