The vehicle’s cooling system is designed to maintain temperatures at an optimum level under various conditions – idling, while driving, hot or cold conditions, pulling loads, with the AC or the heating system on.

Any of these components can fail, causing your car to overheat, especially when your car is idling in traffic or while parked at the side of the road.

Overheating of your engine at idle can cause serious and expensive damage. Gaskets, hoses, and seals may fail, causing clouds of steam to billow out from under the hood. Pullover quickly and turn the vehicle off to prevent further serious damage.

Reasons Why Your Car Is Overheating When Idle 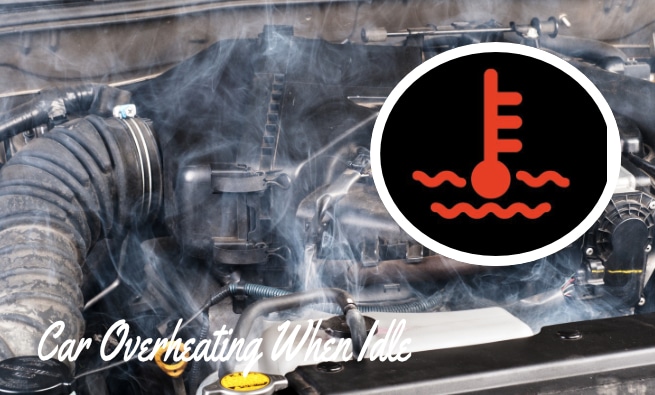 A motor may be overheating while idling for multipe reasons. A low coolant level caused by leaks in the radiator or hoses is a common overheating issue.

Broken fan belts, broken or corroded water pumps, corrosion in the radiator, and faulty thermostat may obstruct the flow in the coolant reservoir.

Failing thermostats in the closed position can also cause overheating. Have your cooling system checked by a qualified mechanic prior to being stranded on the side of the road with an overheated engine.

Head gaskets can deteriorate over time, especially if the car engine is constantly running hot. A new poorly installed gasket may allow leaks of oil and lower the compression, which delivers less power to the wheels.

Drivers would not even notice hot coolant leaks; however, as the levels decline, the engine starts to overheat even when it is idling. Drivers would not notice fluids under the car; however, they might notice a sweet smell from the motor area, indicating leaking coolant.

Radiator fans are designed to cool the engine while sitting in traffic or parked with the engine running. Sufficient air flows through the radiator while driving but not while the vehicle is stationary. This is the job of the electric fan.

A blown fuse, bad wiring connections, or a damaged fan may be the cause. When the fan does not draw air through the radiator to cool it, the overheating problems, especially on hot days or while parked with the overheated car running.

A broken radiator fan or clogged radiator can also cause your engine to overheat. The fan helps to keep the radiator and engine cool, and if it’s not working properly, the engines overheat.

A stuck thermostat due to corrosion, in the closed position or partially closed, will cause the engine to overheat. Operating the motor on hot days with the AC running in rush traffic is probably one of the toughest environments. A suspected stuck thermostat should be tested and replaced.

Coolant levels can be low for many reasons leading to less efficient cooling and overheated engines. Stones hitting your radiator can cause a small leak to occur. Older radiator hoses can spring small leaks or even catastrophically fail.

Seals around the water pump, inside the engine, and even the gasket can also leak. There may not be a noticeable puddle of antifreeze under the car. However, a slow leak can go unnoticed until suddenly you notice the engine running hot at idle.

This car part pumps antifreeze through the motor and out to the radiator. If the water pump fails, your engine quickly overheats, causing the coolant to boil over and dispersing sweet sickly steam from the engine area.

The pump would suffer a mechanical failure caused by age, corrosion, or obstructions in the pump.

6. Air in the cooling system

Normally there is no air in the cooling system; however, changing a thermostat, replacing the pump or hose can leave air pockets or bubbles inside the pipes and ducts inside your engine.

If these air pockets prevent coolant from reaching sections of the motor, the car can overheat. Operating an engine that has overheated can cause head gaskets to blow, the cylinder head to warp, and pistons and valves to be damaged.

As your car ages, the hoses can become cracked and may burst due to high pressure, or the hose’s wall becomes too weak. A small leak may leave a puddle of antifreeze on the ground under the car.

A bursting hose will cause clouds of steam to billow from under the hood. Avoid opening the hood until the steam has dissipated, do not touch or try to remove the hot radiator cap until the overheating car motor has cooled to a safe level to avoid burns to your hands.

The electric fan might continue running after the engine has been shut off until the coolant in the radiator has cooled to specified levels. On hot days, if the fan is not operating, drivers could notice the temperature levels increase.

Shut off the AC, turn on the heater and open the windows to help cool the motor. Pullover and check the fan and the electrical system if you notice that it is not running.

This belt drives the vehicle’s water pump and the radiator fan to cool the engine on older vehicles. Modern vehicles utilize electric fans; however, the belt still drives the pump forcing coolant through the engine and radiator.

A warn belt might slip and cause a squealing sound. Of course, a broken belt means that the pump is no longer forcing the fluid agent through the system, and your engine overheats quickly.

Always have the fan belt and the fan clutch checked and replaced if needed to prevent engine overheating while traveling.

What do you do if your car overheats while idling?

There are several steps to take if you notice the temperature gauge beginning to rise while the car is idling while parked or sitting in heavy traffic. Pay attention to this gauge and try the following:

Is a burning smell related to overheating at idle?

A burning smell coming from the vehicle’s motor area can be related to a number of issues. If the engine oil has leaked onto a hot surface, it will burn and cause smoke to emanate from the motor compartment and smell like burnt oil.

Leaking antifreeze has a sweet smell, and there may be clouds of steam coming from the car motor area, indicating a loss of coolant. Always pull over and turn the vehicle motor off to investigate before your engine overheats and causes extensive damage.

Check first because the hood could be hot. Allow the vehicle’s motor to cool before attempting to open the hood. Try not to remove the radiator cap with a hot motor.

Can I drive my car with a blown head gasket issue?

Driving a vehicle with a blown gasket is only going to cause additional damage to the vehicle’s engine. Not only does the car overheat, but additional gaskets and seals would probably be damaged.

How can I make my engine temperature cooler?

Can low oil levels cause overheating at idle?

The main function of the oil in your engine is to lubricate all moving parts.

A secondary function is to provide a cold feature to these areas and dissipate heat to the oil pan located under the motor. Low oil levels may prevent some parts from being lubricated, causing them to run hotter than normal.

Usually, the first sign is when the engine is at idle in hot conditions, and something is not operating according to specifications.

At the first sign of overheating, check that the radiator’s fan is working, the fan belt is in place and doing its job, verify fluid agent levels and oil levels. Top up if needed.

Have a mechanic check your thermostat for proper operation. Make sure you check the fluid levels constantly. Regular vehicle maintenance will avoid most of these issues. Still don’t know why is my car overheating when idle?