You probably have problems with your vehicle, and you want to know what are the common symptoms of a bad PCV valve.

These emissions will combust again in another engine cycle by directing these gases back into the combustion chambers. So, if your vehicle’s PCV valve is not functioning properly, then these emissions will not be cleanly released into the atmosphere.

Before we go over the top 10 bad PCV valve symptoms, it’s important to know how the PCV system works.

A positive crankcase ventilation valve or better known as a “PCV valve”, is a one-way valve that allows gases from the crankcase to be vented to the atmosphere.

The PCV system works in conjunction with the fuel injection system to manage these gases by sending them through the engine to be burned rather than allowing them into the atmosphere.

Plus, this difference in pressure creates a vacuum that opens the PCV valve and allows the gases to be drawn out of the crankcase. The blowby gases that are vented from the crankcase contain harmful vapors that can damage the environment.

The PCV system helps to reduce these emissions by routing them through the engine, where they are burned in the combustion chambers. Overall the PCV valve is a crucial part of the engine’s emission control system, and it helps improve the performance of the engine.

10 Of The Most Common Bad PCV Valve Symptoms 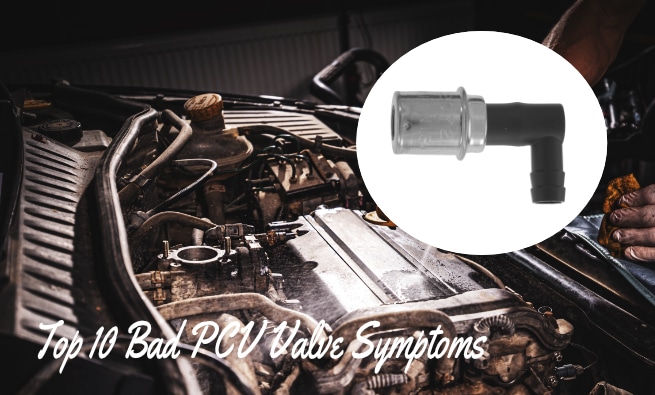 The PCV valve can become stuck in either the closed or open position and cause several conditions that contribute to poor engine operation, increased pollution, and other issues.

If the engine surges or there is black smoke coming from the tailpipe, this is an indication of a failed valve. Less noticeable is the buildup of moisture and sludge in the engine. Here are some of the signs of a malfunctioning PCV valve:

An increase in oil consumption is usually a symptom of a PCV valve stuck in the open position. The valve is open, allowing gases to exit the crankcase in all situations – idling as well as high power situations.

Vaporized oil is passed through the valve into the combustion manifold and burned to cause black smoke to exit from the tailpipe. You may also see oil leaking dripping onto the floor of your garage.

If one of the tubes connecting the PCV valve to the crankcase and the intake manifold is loose or disconnected, the crankcase gases exit into the atmosphere.

You may hear a whistling sound, and the engine compartment can become abnormally dirty with oily blowby exiting the hose.

An oil leak or an intake manifold gasket leak are common problems found when the PVC system is not working correctly and can cause the engine to run rich or lean.

Filters become contaminated over time for a variety of reasons. Most people are familiar with the filter on the air intake systems for your engine. This particular filter is also called the breather element.

This filter removes dust, dirt, and insects before the air enters the car engine and should be checked when servicing the engine. Some vehicle engines have a wire mesh filter just below the PCV valve to filter out oil and sludge.

In addition, there is a crankcase fresh air intake filter which can also become clogged, disrupting the flow of unburnt gases from the crankcase through the valve and back to the manifold. Again these should be checked at servicing to make sure they are not clogged.

Poor engine performance can be caused by any number of sensors malfunctioning, fouled spark plugs, dirty injectors, a faulty PCV valve, and more.

If you are experiencing poor engine performance, check trouble codes generated by the car’s computer and begin checking some of the easier items. A PCV valve can easily be checked. Carefully disconnect the PCV valve from the PCV hoses and shake it gently up and down.

You should hear a weird clicking sound which indicates it is not stuck closed or open. While you have it out, clean it and then reinstall it. If this is not the source of the problem, other areas will have to be explored.

The check engine warning light may be on because the car’s computer has detected an issue with one of the systems in the engine. The first step is to check the error codes and follow these indications to determine what is causing the light to illuminate.

#5 Smoke coming out of the exhaust

Several issues can cause smoke to come out of the exhaust. These situations include the following:

The PCV Valve opens and closes to allow blowby from the pistons into the crankcase. When it stays open, unburnt gas and air along with a small amount of oil are fed back into the combustion chamber.

Burning oil can produce smoke in the exhaust system and is an indication of a PCV failure.

Smooth engine idle speed depends on everything working as designed, including the PCV Valve. Many factors can contribute to rough engine idle or high idle, including:

A warning light may illuminate many of these situations, and the error code will indicate the appropriate device that may be causing the problem.

Although some error codes may indicate that the sensors are malfunctioning, such as the mass airflow control or oxygen sensor, check for a clogged PCV valve or one that is staying open or closed PCV valve.

Alterations of the air-fuel rich or lean mixture and the ignition timing are common reasons that will cause an engine to misfire. In many cases, the check engine light will turn on, identifying error codes that should be checked out.

Misfiring engines can cause damage to the engine, which can become expensive to repair. Here are some of the reasons an engine will misfire:

#8 Excessive carbon buildup inside the engine

Carbon buildup in engines can occur in both modern and older engines due to deposits from the ignition process not being fully cleared away during the exhaust process.

The deposits may look like soot or ash inside your engine and on surfaces exposed to unburnt gases caused by blowby around your piston’s rings. Regular oil changes along with a filter change using high-quality motor oils can reduce this problem and keep your engine clean.

Follow the manufacturer’s recommendations for oil changes and use oils with detergent cleaning properties to keep the engine clean. Car manufacturers may be strict about PCV system maintenance to prevent carbon buildup, so always follow their recommendations.

When you have an unplugged PCV valve, moisture and blowby vapors cannot be removed, and sludge builds up inside the engine crankcase and also creates pressure inside the crankcase, causing oil to leak past gaskets and seals, increasing the burning of oil inside the engine.

With no airflow through the PCV Valve, the air-fuel mixture is richer, increasing fuel usage and increasing emissions as well. Your car may not pass an emissions test if the OEM PCV Valve is plugged with sludge.

When oil and exhaust gases join, a sludge residue is formed. This sludge will grow until it destroys your engine if you don’t treat it. You won’t realize there’s any sludge in your engine oil until you actually notice it yourself.

PCV Valves that are stuck in the open position or even if drivers install the wrong valve, which allows too much airflow through the valve, can cause the air-fuel mixture flowing through the intake manifold to be lean.

Leaking tubes attached to the PCV Valve can also cause similar problems to occur. Drivers should check for vacuum leaks and also test the PCV Valve to make sure it is operating properly.

With the PCV valve removed, a slight shaking should trigger the valve to open and close. If it is dirty and coated with sludge, either clean it or replace the valve with a new one.

A lean mixture may result in engine stalling, increased fuel usage, and a loss of power. In some cases, it can cause engine damage as well. If this happens, the sensors will signal the engine control unit after the air and fuel mixture is ignited.

How much does the faulty PCV valve replacement cost?

The PCV valve replacement cost varies depending on the vehicle’s make and model. It is typically an inexpensive repair, with the average cost ranging from $35 to $100. The PCV valve itself only costs from 15 to 25.

Most PCV valves are located on or near the engine’s intake manifold, making them easy to replace. Many newer vehicles have the PCV valve integrated into the oil filter housing, making replacement more difficult.

The PCV valve hoses can crack or harden over time, and replacement can cost up to $50. Mainly they are plastic hoses that attach to the PCV valve and the intake manifold vacuum. If your PCV valve leaks, you may also have to replace your spark plugs.

Can a bad PCV valve make the car run rough?

When a PCV valve fails, the car runs rough because it can allow oil and other fluids to enter the engine, increasing the internal pressure. When this pressure reaches a certain level, it could start to push engine oil out via gaskets.

This can cause the engine to misfire and run poorly. You will start to notice symptoms similar to an intake air leak. These symptoms become more pronounced as the engine speed increases. Strange smoke is emitted from the exhaust pipe, which is one of the most apparent signs.

How does a faulty PCV valve sound?

If the PCV valve or hose is leaking, the engine could start making strange noises as a result. You might hear a whistling or hissing sound from beneath your hood. This sound is caused by air leaking out of the valve or valve hose hole.

Older car models may not have this problem because the PCV valve is fitted without an electronically controlled engine. You can make sure that the PCV is secured into place by checking the rubber grommet of your valve cover.

Sometimes these sounds can go away simply by just cleaning the PCV valve with a thin hose brush. However, the replacement cost is so low it is not even worth the effort.

What happens if your PCV valve goes bad?

The PCV valve is a super important part of an engine’s functionality. A functional PCV valve will lower the emissions from your engine, and it also helps to improve fuel economy.

If a PCV valve goes bad, it can cause a number of problems. The most serious is that it can allow oil and other liquids to enter the engine, which can lead to serious engine damage.

Additionally, a broken PCV valve can cause the engine to run less efficiently and produce more emissions.

If you think your PCV valve may be going bad, it’s important to take it to a local repair shop and have it checked out as soon as possible. Depending on the severity of the problem, a bad PCV valve may just need to be cleaned.