There are many reasons your car overheats. Always observe the engine temperature if you suspect that your car engine is running hot and have the system checked before going on an extended trip to avoid being stranded with an overheated engine. Keep reading to learn why a car overheats when AC is on.

An overheated engine can cause damage to many components and cause expensive repairs. Turn off the air conditioner system if you suspect overheating and especially while climbing long grades since your engine must work harder to provide sufficient power in this situation.

Is your car overheating when air conditioner is on while driving? Pull the car over to the side of the road in a safe location and let your engine cool down to avoid damage to the radiator, the motor, and your transmission.

Table of Contents Show
6 Common Reasons Why a Car Overheats When the AC is On
1. Bad AC compressor due to overload
2. Failed cooling fans on your car
3. Blocked or damaged radiator
4. Problem with the cooling system
5. Coolant is dirty
6. Broken temperature sensor
How to fix when a car overheats when AC is On?
What should you do if your car overheats in traffic?
Preventing Car Overheating When AC is On
Summary
Related Posts 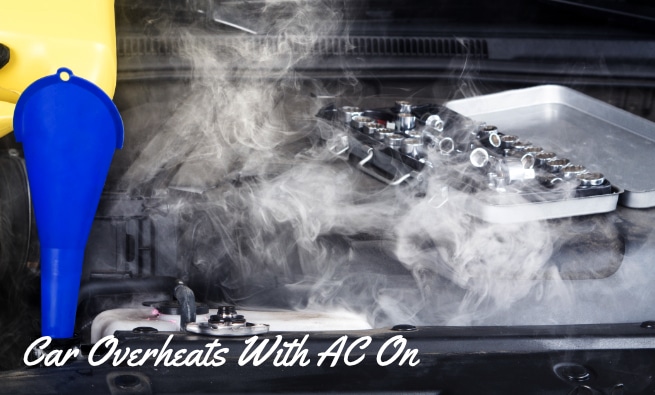 The air conditioner system adds an extra load to the car cooling system. Many drivers find that this additional cooling load from the air conditioning system or while climbing long grades is enough to cause overheating of the engine, potentially leading to catastrophic problems.

However, the most common causes and solutions of overheating when the AC is on include:

If you suspect any of these conditions, have your cooling system checked immediately before being stranded at the side of the road with steam billowing from the engine compartment. The following provides more detail regarding symptoms and solutions when your car overheats with AC on.

1. Bad AC compressor due to overload

Your cars A/C system can stop working, work intermittently or even overheat, placing added cooling load to the engine radiator, water pump, and fans. Any of these situations can cause car overheating.

An A/C system that is not delivering cool air as efficiently as you are accustom to could be suffering from a dirty coolant. They can be filled with bugs and dirt and not provide the cooling needed. Also, your A/C system could be low on coolant, causing it to work harder. Check the radiator and clean it as needed.

Every A/C system has a relay that controls when the system operates based on a variety of inputs, including car overheating due to demand from temperature sensors.

An A/C system that is not working at all or works intermittently could be suffering a faulty relay. A sure sign is when vents blow hot air vents in your car. Check for all of these potential faulty air conditioner issues.

2. Failed cooling fans on your car

All vehicles have cooling fans installed between the radiator and the engine. Many modern vehicles use electric fans. However, there are many older cars with fans driven by the serpentine belt that drives the A/C system, water pump, and power steering systems.

Vehicles with electric fans depend on the battery to be charged and the alternator to generate sufficient electrical power to operate the fan. The fan will often continue running after the engine has been shut off to finish cooling the radiator fluid to a specified level.

If your fans are not running and the car is overheated, this is a sure sign that the problem is the electrical system, wiring, temperature sensors of fan motors, or even a faulty fan clutch.

Fans that operate using the serpentine belt are mechanical and stop running when the engine is shut off. Ensure that the belts are in place, and the fan is running whenever the motor is operating. A seized fan or broken belt could cause car overheating.

Is your car overheating when air conditioner is on? A blocked or damaged radiator can cause the engine cooling system to be less efficient and may cause the engine to operate at a higher temperature than normal.

Many radiators become blocked with debris and dirt. Just consider your windshield or bumper and the bugs that accumulate on them.

Many drivers arrange to have their radiators cleaned once a year, especially if their vehicles are exposed to dirt and bugs that accumulate. Radiators can also be damaged by stones hitting the tubes and causing small leaks.

If you notice radiator fluid under your car, top up the radiator fluid immediately and have itsys checked. If a significant number of the fins between the tubs on the radiator become damaged due to age or debris, your engine cooling system will also be less efficient.

An inefficient cooling system can lead to overheating during periods when the motor is under loads, such as climbing a long grade or an especially hot day.

4. Problem with the cooling system

There are six common problems with auto cooling systems that can lead to overheating.

All fluids found in vehicles degrade over time and pick up particles of corrosion. Your car AC coolant, as well as the antifreeze used to cool your engine is no different. As the antifreeze in your car ages, degrades, and becomes dirty, it also becomes less efficient.

While your car may not overheat under normal conditions, the minute you place it under heavy loads, the cooling system may not be able to dissipate the heat generated by the engine in this condition.

Every manufacturer has a recommended maintenance schedule that includes flushing the coolant system and replacing the old coolant with fresh fluid.

Typically a mechanic would flush the cooling system if the coolant is dirty. Once the mechanic does this step, he will need to turn the air conditioner on to perform another test.

When the sensor fails, it may cause the thermostat to remain closed or only partially open, causing your engine to overheat.

This is an easy fix; however, it is one that should be repaired immediately to prevent an extreme overheating situation which could damage the motor and various other components.

Your temperature gauge on the dash or the check engine light should alert the driver to an overheated engine.

How to fix when a car overheats when AC is On?

Anytime your temperature gauge or engine warning light indicates your engine overheating, there may be only a few minutes before the hot antifreeze blows a hose connection or a hole in your radiator.

Your car overheats when AC is on. Immediately turn off the air conditioning system to reduce the rotational load on the radiator.

After turning off the AC, safely pull off the road to reduce the engine load and give the fans an opportunity to bring the temperature of the coolant down to a safe level. Climbing steep grades pulling a trailer can often trigger an overheated engine.

Your car is designed to operate with the AC running; however, dirty radiators, defective temperature sensors or thermostats, and old or dirty antifreeze can make the system less efficient.

Once the temperature has returned to normal levels, proceed with the AC turned off and have the system checked and serviced for any of these conditions.

What should you do if your car overheats in traffic?

Drivers may notice their car overheating in heavy stop and go traffic, while at highway speeds, the engine operates at the specified temperature.

At highway speeds, the air moves through the vehicle’s radiator and is sufficient to cool the engine antifreeze, while at low speeds, there is insufficient air movement. Pullover safely and investigate.

Driving an overheated engine risks serious damage to the engine to the point your motor could be destroyed. If steam is billowing out from the hood, make sure you wait until the engine has cooled before opening the hood to investigate.

Your hood will be very hot and could cause serious burns. Once the engine has cooled, check fan belts, or listen for the electric fan running to assess if the fan cooling system is operating. The thermostat could also be defective, or the coolant could be low.

Either way, drivers should request assistance and avoid driving their vehicles to protect the car engine from further damage.

Preventing Car Overheating When AC is On

An engine overheats for many reasons; however, regular maintenance can catch most of these. Antifreeze should be changed regularly, as specified by the manufacturer.

These tips will help when it comes to preventing car overheating with AC on.

Does your car overheats when AC is on? Have your car serviced immediately before more serious car repairs are needed! Your mechanic should check for defective thermostats, temperature sensors, dirty engine coolant, and insufficient coolant as well as leaks in the radiator or connecting hoses to solve your overheating issue.

Regular maintenance is the best solution to avoid car overheating. A mechanic can determine if you have any broken condenser fins that are not allowing your coolant system to work properly. Now you understand why a car overheats when AC on.