First of all, the sole purpose of a fuel filter is to ensure dirt and debris are kept at bay from the reach of fuel in a car. More often, when a fuel filter becomes dirty or clogged with dirt and debris or left for too long without cleaning or replacement, the car’s engine performance is dramatically affected.

As such, the gasoline initiated through the car is impeded, which ends up with the fuel pump working much harder than required. Normally the easiest and safest way to ensure your fuel filter is clean enough for efficient use is to single-handedly remove it from your car and blow through it.

If you find no air is let out or flow normally through the filter, that is a clear sign your fuel filter is potentially dirty and should be replaced. However, there are other occasions where your car’s fuel filter can show symptoms of being heavily clogged or too dirty without having it removed for series of tests via inspection.

What is a fuel filter?

Every vehicle has a fuel filter located between the fuel tank and the engine. The job of the fuel filter is to catch small particles of dirt, contaminants, and dust particles that may find their way into the fuel at various points in the delivery to the gas station where you fuel up.

These contaminants can harm your engine if they make their way into the combustion chamber, causing your engine to degrade and deliver poor performance. Drivers who allow their gas tanks to be also depleted risk sediment that has been collected at the bottom of the fuel tank to be sucked into the fuel system. This sediment can also harm your engine.

What is the main function of a fuel filter?

The main function of the fuel filter is to filter out dirt, rust particles, and any contaminants that may have entered the fuel. It prevents these materials from entering the combustion system in your engine and potentially damaging your engine.

Fuel filters are important, especially in modern engines with tight tolerances for many parts, including fuel injectors, valves, and pistons. Harming any of these can cause more serious problems.

It’s a common problem for cars, trucks, and other older vehicles. If you have a damaged filter, your motor will not run properly. The symptoms of this issue are typically the car sputtering or stalling when it is running on the highway or at idle.

You may also notice that your vehicle won’t start up right away after being turned off. Here are some common signs:

Some experienced mechanics understand the relation between trouble codes P0174 and P0171. These are closely related to the mass airflow system and a lean fuel mixture in your vehicle’s motor. Here is where an experienced mechanic will automatically check the fuel filter to see if it is damaged.

These trouble codes are also related to poor engine performance due to a problem coming from the fuel system of your car. In simple words, your engine is not receiving the correct amount of fuel due to a bad fuel filter. It is also related to a clogged fuel injector as well.

Engine Will Not Start

Normally these are some of the major signs, sometimes indicate the symptoms of a bad fuel filter. The problem arises where you struggle hard to start your car or even fails to start at all, which clearly shows the fuel filter is too dirty to function properly.

This may also restrict the fuel from reaching its engine, quite essential for the vehicle’s internal combustion to start. In some cases, the car can also fail to start because of a lack of enough fuel running through its motor, so ensure your car has sufficient fuel.

Under some severe circumstances, the car may refuse to start at all when your fuel filter is heavily clogged or too dirty. Specifically, when climbing through steep slopes, the vehicle behaves oddly as though you’re running out of fuel, eventually making it stop abruptly.

Although if your vehicle behaves like this frequently, it could be the motor lacks a sufficient supply of fuel within its reach. As such, this causes the engine to stall. Mainly a dirty fuel filter can cause insufficient fuel supply from reaching the car’s engine effectively.

Acceleration Problems With Your Vehicle

Another good sign that draws optimum attention to check whether your car’s fuel filter is damaged with dirt or functioning properly.

This frequently occurs when your car starts behaving funny or oddly and suffers from a slowdown syndrome when driven at certain speeds due to a lack of sufficient fuel required for it to go any faster. Even with the fact that you might be stepping hard on the fuel, the vehicle fails to bulge, and the speed remains the same.

On the occasion where you sense some awful smell permeating from your car’s exhaust, chances are your fuel filter is clogged or immersed with dirt and hence needs to be checked.

In such pressing situations, the engine will normally start, although it will stop when it’s not supposed to. This mainly suggests sufficient fuel is initiated through the fuel filter normally when the vehicle is running, but when idling, there is a lack of sufficient gasoline within — which influences its idling issues.

Check whether there are any symptoms from your fuel filter that needs change or replacement because issues as such normally show your car’s fuel filter is either damaged or severely dirty.

Many times, sputtering issues normally occur when driving at a low speed and where the fuel filter is experiencing some minimal blockage. Although after some time, you will have no other choice apart from cleaning or changing the fuel filter entirely.

Lastly, sometimes when you have a bad fuel filter, or it is partly dirty, fuel will somehow go through the filter but will substantially clog the vehicle’s injector or carburetor. As such, this will cause the engine to stall, the engine misfire, have start problems, and much more.

A damaged fuel pump can lead to the engine starving for fuel, which will cause your vehicle to run poorly or stall out completely. If you notice that your car isn’t starting or running smoothly, it could be that the fuel pump also needs to be replaced.

Also, if you start noticing the need for additional fuel, you should have this checked out by a professional mechanic as soon as possible. Most of the time, when this is happening to vehicles, then it’s time for a new fuel filter.

How do you know if you need a new fuel filter?

When a fuel filter is plugged with dirt and contaminants, insufficient fuel passes through it, and the engine will be starved for fuel. The following symptoms could be an indication that your fuel filter needs to be replaced:

Can a bad fuel filter cause your car to die?

Several issues can cause your car’s engine to die while it is being driven. The engine is starved of fuel which can be caused by a dirty fuel filter or a damaged fuel pump. The fuel filter traps dirt and contaminants to stop them from being passed into the motor.

Once the amount of material builds up to a point where insufficient fuel can get through the filter, your engine can die, especially in situations where it needs more fuel, such as accelerating or pulling heavy loads. You may need to replace the filter and have your fuel tank purged.

Can you drive with a clogged fuel filter?

The fuel filter will gradually pass less and less fuel through it as it becomes clogged with contaminants. You may notice a slight hesitation initially at times. It is during this stage that you will either notice engine misfire or the check engine light come on.

However, as the filter becomes further clogged, more serious problems will occur, such as the engine stalling or not starting at all. The car should not be driven if it is prone to stalling, especially in high traffic situations, to avoid being stranded and potential accidents.

How much is the replacement cost of a fuel filter?

Replacing the fuel filter is relatively inexpensive compared to other regular maintenance required on engines. Depending on the make and model of the car and engine, the replacement cost of the fuel filter can range from $60 to $170, including labor costs.

The part itself costs between $20 and $60 and can be replaced by do-it-yourself repairmen. However, take the appropriate safety steps to avoid spilling gasoline and initiating sparks that could ignite the gasoline. A good time to have the fuel filter changed is during routine oil and lube maintenance appointments.

If you regularly drain your fuel tank, you may have to change the filter more often. Today’s fuel manufacturing, delivery, and storage systems have improved dramatically over the past years, with far less contamination getting into the fuel.

A completely clogged filter will cause a lack of power, stalled engine, engine misfire, and poor gas mileage. If you have any doubts about what type of problem you are experiencing with your car, take it into an auto repair shop for diagnosis. 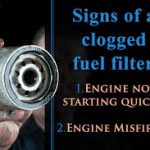 On the other hand, for maximum longevity and vast resilience of your fuel filter, always have it checked and cleaned on regular occasions. Thus, soon as you notice any of the above signs are becoming way much frequent than usual, have your fuel filter cleaned to minimize the level of harm to its functionality.

Above all else, it’s highly recommended by experts and veteran mechanics to ensure your car’s fuel filter is changed at least annually to further maximize the potential of your car’s engine performance and effectiveness.

Similarly, vehicles frequently driven on coarse or bumpy roads and also most probably have high mileage should have their filters changed more often.

Does a bad fuel filter have an effect on the gear transmission ie does it make it jerk when engaging other gears? Please send a reply to my mail box. Thank you.

A damaged filter can cause problems with the gear transmission and other parts of your car. It could even lead to engine failure! That’s why it’s so important to replace your old one when you notice any signs of wear or tear.

Hi my ody 2001 model keeps cutting and twice now refuses to start. Changed the fuel pump and the strainer,still no much good. What’s the problem. Need to change fuel filter can’t find it

If it has difficulty starting then the filter needs to be replaced. We recommend speaking to a local professional mechanic or visit our contact page.

I got the same symptoms that of a hard start when I start up my truck all the time.When I turn the key to on, there are times when the engine cranks for 5 seconds and finally the engine starts up. I told my Automotive mechanic today about what the truck does, he said it could be the check valve in the fuel pump and if its the fuel filter, the hard start up will go on all the time.

Looks like you have a clogged filter. Get a filter replacement and you will notice an engine performance boost.

Yes, a damaged filter will indicate a fuel system problem causing the check engine light to come on.