Essentially, the fuel filter performs a crucial role since it keeps the debris out of the gasoline in a car. Because of a clogged fuel filter, the flow of gasoline through the car is impeded.

As a point of fact, the hesitations in the motor result from the flow of gasoline being impeded, thus resulting in abnormal combustion and reducing the engine’s power during acceleration.

What are the symptoms of a clogged fuel filter?

When the fuel efficiency starts to drop, the car’s engine stalls, the check engine light comes on, or the fuel pump fails, it’s likely that there is a problem with the fuel filter. These bad fuel filter symptoms or warning signs will result in the full replacement of the clogged filter.

You can prevent this by getting a new filter every time you take your vehicle to get an oil change. We are going to go over the main clogged fuel filter symptoms and the standard fuel filter replacement cost.

Table of Contents Show
What are fuel filters?
How does a fuel filter work?
7 Common Symptoms of a Clogged Fuel Filter
#1 Engine Misfires or Backfires
#2 Reduced Fuel Economy and Power
#3 Difficulty Starting the Vehicle
#4 Rough Idle and Poor acceleration
#5 Check Engine Light
#6 Poor Engine Performance
#7 Engine Stalls
What happens when a fuel filter is clogged?
What is the cost of replacing a dirty fuel filter?
Summary
Related Posts

What are fuel filters? 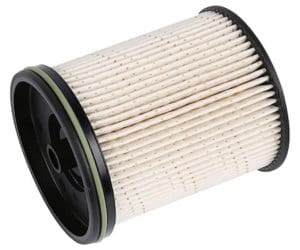 A fuel filter is a device that removes impurities from fuel before it enters the engine. It can be located inside the engine compartment or in the fuel line between the tank and the engine, close to the fuel pump assembly.

Older cars used to have the filter located on top of the motor where it was easy to spot. Nowadays, fuel filters are often located in different areas, making them more difficult to spot.

They are made of paper or cloth, and trap contaminants as the fuel passes through. Furthermore, this dirty job makes filters very prone to clogging. If this happens, the fuel pump will try to compensate, and it can eventually cause it to fail prematurely.

How does a fuel filter work?

Fuel filters were designed to remove contaminants from the fuel before they entered the motor. A fuel filter typically contains a paper or cloth filter element that traps contaminants as the fuel passes through.

As the filter becomes clogged with contaminants, it becomes less effective at removing them and will need to be replaced. Replacing a fuel filter is usually a quick and easy job that can be done in about an hour.

You often see that a clogged filter can fail completely because of restricted flow, and this will cause the engine to stall. Fuel typically starts on your gas tank, which is then pumped into the fuel lines thanks to the fuel pump on your car.

A clogged fuel filter can have a major impact on your car’s performance and fuel economy. If you suspect or think that your fuel filter is damaged, here are some common symptoms to watch out for:

One of the first clogged fuel filter symptoms is engine misfire. If it is partially blocked, it will cause your engine to run lean on fuel. This can lead to misfires, as the motor isn’t getting enough fuel.

A blocked fuel filter can cause the car to backfire since it is the explosion produced by the running of the internal combustion engine that, in most cases, occurs in the induction system.

The presence of the unburned fuel, which is ignited at a slower rate than lean fuel-air mixtures hence cause the backfire or engine misfire. This condition causes a popping noise as well as a loss of power and forward motion of the car.

The filter sits somewhere in between the motor and the gas tank, so if it’s clogged, then the fuel can’t get to where it needs to go.

When your fuel filter is clogged, it will restrict fuel flow to the engine. This will cause your car to use more fuel than usual, resulting in reduced fuel economy.

Modern vehicles now come equipped with a computer that will control the power output of the motor to match the amount of fuel being delivered. So, if your car is having trouble accelerating or has reduced power, it could be that you need a new fuel filter.

If your fuel filter is completely blocked, it will prevent fuel from reaching the motor. This can make it very difficult to start your car or may even cause the engine to stall.

It is dangerous for the fuel filter to clog in view of the fact that there is a serious problem experienced while starting the car. Although this is the only cause of the hard start of the car, it contributes greatly to the proper functioning of the carburetor.

For any car to start, it requires fire from the engine, which is the result of fuel as well as the gas generated. Failure to start it implies a very definite sign of a dirty fuel filter.

A clogged fuel filter can also cause your engine to idle rough. This is because it isn’t getting enough fuel and is running lean. When there is not enough fuel getting to the motor, it can cause all sorts of drivability issues such as poor acceleration.

If the car sputters when traveling at low speeds, the filter is most likely dirty. White smoke on a diesel-powered vehicle is also an indication that it needs to be replaced.

If your filter is damaged, it will often trigger the check engine light. This is because the motor is running lean on fuel delivery, and the oxygen sensor is picking up on this sign.

Error codes will indicate problems with the fuel pressure sensor or the mass airflow sensor. These sensors are often located near the air filter, so it’s possible that they could be getting contaminated with dirt and debris as well.

A dirty fuel filter affects the performance of the engine. Overall it is not going to perform the way it is likely to perform.

In essence, a clogged fuel filter typically becomes apparent when individuals try to pass another vehicle at high speed; hence it will stop the engine immediately from functioning.

Additionally, the problem arises when the car is at a lower speed. At the same time, the pressure is at a lower point. This causes reduced engine power, thus resulting in the idling of the car engine.

If you have a diesel engine, your filter might get clogged owing to diesel fuel germs and the black stinky gunk they generate.

A clogged fuel filter causes stalling of the car since the car needs a constant supply of fuel in order to maintain its efficiency.

Stalling of the car depends on the flow of fuel towards the engine since a small amount will automatically reduce the functionality of the car.

What happens when a fuel filter is clogged?

A clogged fuel filter results in fuel starvation in a car. This condition greatly affects the internal combustion engines, especially the engines fueled by diesel, kerosene as well as petroleum.

Consequently, the engine will not burn as well function without the engine’s power the fuel in all modes of transport. It can also allow particles to reach a fuel injector and cause an obstruction.

In most cases, this starvation leads to leaking of the fuel in the tank since the dirty fuel filters prevent the fuel from reaching the engine and causing starvation. This drastically reduces the performance of the vehicle when accelerating under heavy loads or going up a steep incline.

What is the cost of replacing a dirty fuel filter?

The total cost of replacing a fuel filter will vary depending on the make and model of your car. The average cost to replace a fuel filter is between $50 and $100. Also, the location of the filter and the labor cost will play a role in the replacement cost as well.

A fuel filter works like a strainer in your car’s fuel supply system, preventing anything larger than fuel molecules from getting into the fuel injectors and the combustion chamber.

As car owners, we need to ensure that we are regularly checking and replacing the filter to keep our cars running smoothly. Immediate fuel filter replacement is needed when the check engine light comes on, when the car is sputtering, or when there is white smoke coming from the exhaust.

This type of filter is typically located between the fuel tank and the engine. It is responsible for filtering out impurities from the fuel before it reaches the engine. Over time, it can become clogged with tiny dirt and debris, which can cause the engine to run less efficiently.

If you notice any of these warning signs or symptoms, it’s important to have your car checked out by a professional mechanic or a repair shop. They will be able to tell if your fuel filter is bad and can replace it if necessary.

Make you check the owner’s manual so that you know which type of engine oil is best for your car and the frequency of changing it. Foul odors can also be a sign that the filter needs to be changed.