The ECM is also referred to as the engine control unit (ECU) and among other names. No matter what you want to name it, it is in charge of doing the same thing.

An automobile’s ECM is a computer system responsible for controlling the operation of the engine and transmission as well as other onboard components.

The ECM (Engine Control Module) is a crucial part that communicates with the motor to ensure it runs smoothly. It is also in charge of reading all of the calculations from the sensors in the engine bay.

Many of the vehicle’s engine performance and drivability problems may be traced back to a failing ECM.

We look at what’s going wrong, where it is, and how much it will cost to replace the ECM. Now, let’s take a short glance at the indicators or symptoms of a bad ECM.

Table of Contents Show
8 Common Signs Of A Bad ECM or Faulty Engine Control Module (ECM)
#1. The Car’s Check Engine Light Illuminates
#2. Misfiring erratic engine behavior or stalled engine
#3. Bad Engine Performance Issues
#4. Reduced Fuel Efficiency or Poor Fuel Economy
#5. The Vehicle Will Not Start
#6. Acceleration Loss All of The Sudden
#7. Your engine unexpectedly shuts down
#8. Uneven or Unusual shifting
The ECM’s Role in the Engine’s Functioning
Bad ECM Replacement Costs If the ECM Is Faulty And Produces Poor Engine Performance Issues
What Should I Look for When Diagnosing My ECM?
Last Symptoms of a Bad Engine Control Module Tips
Related Posts 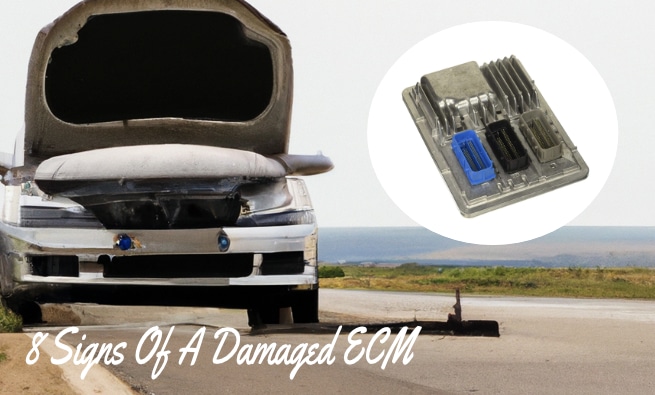 A bad or failing ECM will often cause the check engine light to illuminate. Problems with the engine’s performance, such as misfiring or stalling, might also be apparent.

If your car won’t start at all, it’s also a significant indicator that your ECM is defective. Here is a complete list of warning signs or common symptoms of ECM failure:

The purpose of the check engine light in today’s automobiles is to alert the driver to potential problems. Various issues might cause this light to turn on, but a malfunctioning electronic control module (ECM) is one of them.

If it finds a broken sensor, circuit, or other electrical parts, it will turn on the “Check Engine” warning light. Only by reading the OBDII fault codes can the problem be determined. To determine the main cause of the issue, the OBDII codes should be read by a technician who can properly diagnose and fix the problem.

When the ECM malfunctions, it sends erroneous signals to the engine, which throws everything out of whack. A misfired situation is the result of a broken computer. There’s always the chance that the automobile will die at the next red light.

These signs and symptoms, however, are unpredictable. Furthermore, the automobile may be easy to handle one day and challenging the next. When it has a problem, the vehicle’s ECM may also cause the engine to misfire or stall.

ECM failures come and go without any discernible pattern regarding severity or frequency. If you notice the engine stalling or misfiring, it’s best to have the failing ECM inspected by a mechanic.

A bad ECM may be the root cause of all engine performance difficulties. Any damage to this module may cause the engine’s fuel-air ratio and engine timing to become unbalanced.

You’re left with less power, most noticeable when you floor the throttle or pull a heavy load up a steep grade. The ECM may be to blame if you’ve noticed a decrease in acceleration, increased fuel consumption, engine misfiring or loss of power.

This can be extremely problematic for vehicles, as the incorrect air fuel ratio and engine bad timing caused by a faulty ECM can cause engines to run too rich or too lean resulting in vehicle’s performance issues or even engine damage.

The faulty ECM prevents the engine from receiving the ideal amount of gasoline. If the engine control module in your car is broken, it could make your car use more gas than usual.

If you monitor your gas mileage, you may get an early warning of a problem. Still, something is not quite as right if you spend more time than usual at the gas station.

Since the ECM is responsible for making changes to your engine, the way your car uses gas, how fast it goes, and how much power it has can all change drastically. A faulty ECM may cause the engine’s fuel settings to be out of sync.

#5. The Vehicle Will Not Start

If the ECM malfunctions entirely, your automobile cannot turn over. Sometimes the engine may still turn over, but it won’t be able to ignite without the vital inputs from the computer.

The motor has no idea what to do because there is no engine management. You may hear it try to crank, but without the proper amount of air and gasoline injected, it will not start.

A non-starting vehicle can be caused by factors other than a broken ECM. Other possible causes include a bad fuel pump, bad ignition, a faulty computer, or a dead battery.

#6. Acceleration Loss All of The Sudden

The TCM collaborates with your ECM to provide optimal acceleration. While the transmission control module (TCM) takes care of shifting, the engine control module (ECM) makes the necessary adjustments to the throttle.

If the engine control module (ECM) isn’t calibrating the throttle correctly, shifting will be jerky, as if you were riding shotgun with a novice driver. This can throw off the timing of the fuel settings of the engine and cause an improper air-fuel mixture in the fuel system.

When this happens, a professional needs to make adjustments to your engine. He will have to calculate and tune engine spark and fuel to get maximum efficiency from your engine. Or else your vehicle will consume more fuel than it usually does.

#7. Your engine unexpectedly shuts down

To add insult to injury, this is another sign of a fuel-to-air ratio that is either rich or too lean. Idling is common when this occurs since a sputtering engine has less momentum to keep going than a fast-moving one.

Therefore, it’s more likely to happen in this situation. You should check your automobile to see if it stalls when idling. When this occurs, the engine may still crank, but you might end up with a car that does not want to start at all.

This issue also causes a lack of acceleration. However, it occurs when your ECM sends incorrect information to your TCM. Your TCM isn’t obtaining the data it needs to make the right shifts at the right moments.

Because of this, shifting can be jerky and uncomfortable, or it can happen at bad times, making the engine surge or stop. In this case, the engine is not receiving proper information about how much fuel to burn.

The ECM’s Role in the Engine’s Functioning

The engine control unit (ECU) is not the only name for the engine control module. The car’s ECM plays one of the most important roles in a contemporary car. For optimal engine performance and handling, it is the primary onboard computer.

Plus, the ECM collects information from the sensors and uses that data to determine how the motor should perform. To do this, it examines factors including fuel supply, ignition timing, and air-to-fuel ratios.

Since it controls so many parts of how the car works, a faulty or failing ECM can cause a wide range of problems. The car may become uncontrollable in severe circumstances, and sometimes the engine shuts off for no reason.

Computer systems found in modern cars are highly complicated, intricate, and convoluted. When the computer detects an issue, a warning light will appear, and the symptoms may also start to appear while using your automobile.

Your automobile’s make and model will also affect the ECM’s price. A modest, compact automobile driver will spend far less than the owner of a vast, luxurious SUV. Modern vehicles with a damaged ECM may end up paying more if there’s a problem with the powertrain control module.

The repair shop will want to make a diagnosis before agreeing to replace the ECM. To add this to your budget, expect to pay between $100 and $300. Having a code scanner on hand might help you save money. The meaning of each of the error codes may require some web investigation, though.

A secondhand ECM is an option if you’re trying to cut costs. However appealing it may seem, this is not the wisest course of action to take. First of all, a used ECM is riskier because it doesn’t have a warranty and could stop working at any time. It still requires reprogramming, which adds to the overall cost.

The repair shop may be able to reprogram or alter your current ECM under certain circumstances. You won’t have to spend as much money on a new ECM if this occurs.

What Should I Look for When Diagnosing My ECM?

The least invasive way to figure out what’s wrong with your ECM is to connect an onboard diagnostic (OBD or OBD II) tool to the diagnostic port. You may then check the type of trouble codes generated by your vehicle’s engine computers.

Your diagnostic equipment’s instructions should tell you what the different codes are. Some of the most frequent are as follows:

The check engine light turns on for multiple reasons. It can be triggered by a malfunctioning component or an issue with the engine’s emissions, and it is typically tied to your PCM (powertrain control module).

If you have a problem with your ECM, you should scan the computer for trouble codes, and you should get your vehicle inspected as soon as possible by a qualified mechanic .

These signs of ECM failure may or may not warrant immediate emergency action. Often, a cheap sensor or a damaged cable is to blame. A complete diagnostic is the only way to find out for sure.

We went over more than 5 symptoms or signs of a bad ECM that can cause erratic engine behavior. If the ECM fails completely, the car will be without any engine management control at all.

Don’t forget that the ECM tells the PCM and TCM what to do with the car’s gears, traction control systems, and anti-lock brakes. Any failure will produce these symptoms to alert the car owner of a potential issue.

The check engine light usually illuminates when there is a problem with the ECM. Find a mechanic with a diagnostic computer system that can figure out what is wrong and detect the cause of the problem.