Dry ice dent removal has become a popular way to remove dents from your car. It is relatively inexpensive, and it works with no damage done. Many people are wondering how dry ice dent removal actually works and if it’s worth trying.

Not all of the DIY dent repair methods actually work. There are plenty of videos online that show people using dry ice to remove dents from their cars. However, none of them explain in detail how dry ice dent repair actually works.

This article will cover everything you need to know about the process of removing dents with dry ice, as well as whether or not this process actually works!

Table of Contents Show
How do you pop a dent with dry ice?
Where can you buy dry ice and how does it work?
Does dry ice work for dent removal?
Can you remove a dent combining heat and dry ice?
Can all dents be removed from your car?
Dry Ice Dent Removal vs. Paintless Dent Repair
Tools and methods that actually help you remove dents
Paintless dent repair using Rods
Glue pulling utilizing PDR tools
Dent repair using Bondo or Body Fillers
Related Posts

How do you pop a dent with dry ice? 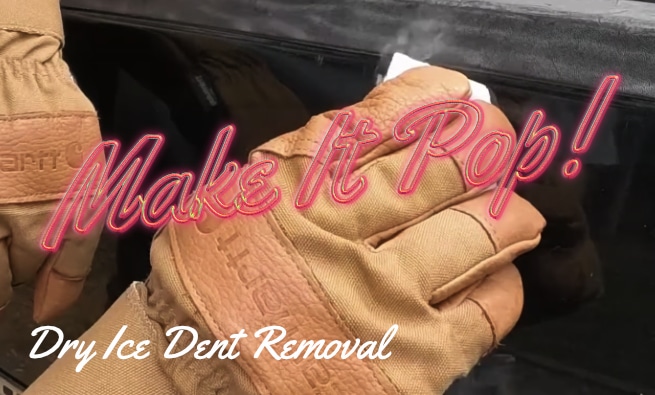 Fixing dings and dents on a car with dry ice is relatively inexpensive, and it doesn’t damage the car’s paint. The process involves using a dry towel in combination with the dry ice, together with a hair dryer or heat gun.

Thermodynamics and how it works in metal is a subject that many people may not be familiar with, but what does this have to do with PDR? The theory of dry ice blasting is that dry ice creates a gas that will push the dent out of the car.

You might not know this, but the type of metal used on cars changes its size and shape depending on whether it is heated or frozen. When metals are in a liquid state, they expand due to thermal energy being released from their atoms which thus expands the entire structure. However, when those same materials contract as they become solid again because that release of heat ceases at freezing point.

In theory, if you grab a heating gun and start to apply heat to the surrounding area of the dent you are looking to remove, the metal that is currently being heated will expand. If you apply the dry ice immediately afterward, then the dent will pull itself out.

Some online videos claim that if you take a can of dry ice and place it over the surface of the dent for about 30 seconds to a minute, the dent will magically disappear.

It’s important to note that this doesn’t work on every dent. The process is pretty easy to do, but it can take some time and patience as well. However, this method has not been proven to work, and no auto body shop practices this method.

Where can you buy dry ice and how does it work?

Dry ice can be bought at your local grocery store. Safeway, Walmart, Kroger/King Soopers, and Costco all carry dry ice. The blocks come in a variety of weights, from 1-5 pounds usually, but it also comes in 10-pound bags as well.

Dry ice immediately starts to smoke when you put it in liquid or out in the sun. It’s is used in many different ways, but one of the most popular and well-known uses is for cooling ice cream. The effects of this ice only last about 10-15 minutes after it hits the outdoor temperature. Be careful not to inhale too much of this type of ice!

Dry ice dent repair is not a proven or a guaranteed procedure. There are many cases where the dent is not removed, and people tend to waste their time and money on the dry ice.

If you are trying to fix dents with dry ice, you need to make sure the dent is not too deep or severe, as dry ice doesn’t have enough force to remove shallow dents.

The exercise of removing car dents with dry ice works by using it in liquid form and then freezing the surrounding areas of the car’s body panels that are next to the dent. The cold temperatures cause shrinkage in metal and plastic, which causes pressure on one side of the panel while also causing expansion on the opposite side of where you placed your cold ice.

This type of repair must only be done outdoors so that there are no harmful fumes when you release gas out into the open space. You will need some type of container for holding water mixed with dry-ice pellets.

Most body shops avoid using this procedure because it does not completely restore your vehicle’s panel into its original shape.

Can you remove a dent combining heat and dry ice?

The only way that dry ice will work for dent repair is if it is combined with a hair dryer or heating gun. This is because the low temperature of dry ice does not have enough force to cause an expansion.

One temperature setting that is known to work when using hair dryers to warm up metal is the medium heat setting. This setting will not cause any paint damage, and it is typically used to fix dings on a vehicle.

Aluminum foil is used to protect your vehicle’s paint and avoid any unnecessary damage from occurring. A combination of hot and cold temperatures can be effective in removing dents, but it isn’t nearly as successful or easy to use as a more traditional method PDR.

Dings that are located on the fender, roof, and bumpers are prime candidates for this type of dry ice dent repair.

Can all dents be removed from your car?

The rapid chilling procedure of dry ice dent repair is not the most effective method and can be time-consuming. However, most dents can be removed completely from your car’s body.

Hail damage is not something that a hair dryer and dry ice can repair. It requires the use of PDR rods or other more proven methods to remove hail damages on these surfaces.

That is why we recommend using the services of a PDR technician if your vehicle has suffered from damages caused by a hail storm. Also, it is always of good practice to protect your car from hail.

Paintless dent repair is an effective service or method that can remove most minor dents from your car’s body. It is less time-consuming and often does not require you to warm any steel or metal.

On the other hand, dry ice dent repair is a procedure that is not proven to work and is not worth trying. Typically you need to take extra steps to protect your car’s paint, like using aluminum foil, for instance.

You will have to roll out the aluminum foil near the surface area that you are going to work with and apply the heat using a hair dryer. However, this procedure is not as effective as paintless dent repair.

Tools and methods that actually help you remove dents

Multiple dings on your side door or roof can really wreak havoc on the appearance of your precious vehicle, but luckily there are several common methods used to remove them.

The use of rods is a common tool that any PDR tech will use when you are trying to pop a dent out of your car doors. It is known to work the best on damages caused by hail on a vehicle. The cost of this type of dent repair service can be expensive.

Depending on the location of the damage, the glue pulling technique can be another effective way of fixing damages caused by hail or other round objects. It is a service that is offered by many companies all over the US, and you can also do it yourself if you buy a kit online.

This is a common service offered by most body shops which typically repair car dents constantly. It is a practice used in most vehicles with hard steel body parts. These types of services tend to cost a little more than paintless dent repair because the tech needs to repaint the surface of the body. Try reading more about thermodynamics and how it works.