The throttle body in your vehicle is an important part of the combustion and air intake system on your car’s engine. All engines must mix the correct amount of air flowing into the engine and fuel to ignite this mixture inside the cylinder to drive the pistons in your engine.

With the correct mixture of air and fuel, your engine delivers maximum power and efficient burning of fuel. A throttle body that is not working according to the manufacturer’s specifications can cause all sorts of issues with your engine.

These include poor gas mileage, low power, and lots of pollution due to the incomplete burning of the fuel inside the engine. Read more about what the throttle body is, how to tell if it is not functioning properly and how to make repairs.

What is a throttle body on a car?

The throttle body on your car’s engine is located between the air intake and the engine manifold. This is where clean fresh air is mixed with fuel for the combustion process.

Additionally, the connection between the accelerator pedal and the valve is either by cable or by wire for electronically controlled vehicles. Your car’s engine control module or ECM controls the fuel systems including the fuel injectors and air mixture to deliver the required power from the engine.

The car’s computer system maintains the mixture, however, occasionally there can be a malfunction of the throttle body, causing the air-fuel mixture to be less than optimum.

What happens when the throttle body goes bad?

When a throttle body is going bad you may notice a variety of symptoms. Essentially there is not enough or too much air entering through the throttle body causing the engine to run poorly or idle slowly (rough idle). Your engine may even stall when you depress the gas peddle. When you allow more air, the fuel-air mixture is too lean.

Several issues may cause these problems including:

Engine vacuum leaks can cause a high idle with too much air entering the system. Regular servicing and cleaning along with checks of the system can usually prevent these issues.

Symptoms of a Failing Throttle Body

A clean properly operating throttle body is in sync with the fuel intake and the gas pedal all controlled by your engine’s ECM. Making sure that the correct amounts of air and fuel enter the engine is critical to make sure the engine is running at maximum performance. If the throttle body begins to malfunction for several reasons, several symptoms begin to show up.

A malfunctioning throttle body can cause poor fuel economy. Check your fuel economy to assess if the average number of miles per gallon is decreasing. If it is out by more than 10 to 15%, there is a good chance that the throttle body is not operating correctly.

The check engine light can illuminate on your dash for many reasons. Attach a code reader to the ECM and observe the error code to determine the reason for it illuminating. If it indicated the electronic throttle control valve, investigate further. Clean and remove all grime, check the electrical connections, and retest.

Carbon deposits, grime, and dirt can build up inside the throttle body potentially causing moving parts to stick as well as creating rough surfaces which, disrupts the flow of air through the throttle body and reduces the efficiency of the engine. You may notice increased fuel consumption, poor acceleration, and idling slower.

Modern vehicles rely on electronic controls and much more wiring than older cars. These connections can become corroded over time or are damaged in some manner. If the ECM loses communications with the throttle body, the electronic gas pedal, the ECM may cause erratic fuel consumption and engine power levels.

Grime and dirt can build up inside the throttle body, disrupting the flow of air through the unit and affecting the fuel and air mixture. Occasionally the grime and dirt also cause the throttle body plate or butterfly valve to catch on the grime. The butterfly valve may not open or close fully, disrupting the airflow and affecting the performance of the engine.

All of the air entering the engine should pass through the throttle body. The mass airflow meter can measure the amount of air and the ECM controls the fuel injection accordingly. If there is a vacuum leak, some air is bypassing the throttle body and the air-fuel mixture will end up being too lean causing erratic engine speed at idle and low-speed performance.

If your engine is not idling smoothly or idling too slow or too fast, it could be because the throttle body is not controlling the amount of air entering the engine. The butterfly valve inside the throttle body might be stuck due to dirt, grime, or carbon deposits. There may also be a vacuum leak. Check the error codes generated by the ECM to understand what might be causing the issue.

The throttle stop sets the low idle speed for your engine. The cable assembly attached to the butterfly valve rests against this stop at idle. If this screw is loose or set improperly, your engine may not be receiving sufficient air at idle causing the engine to idle too slowly, stutter, or even quit running. Check to see if the incorrectly adjusted throttle stop is causing the problem.

How much does it cost to replace the throttle body?

The cost to replace the throttle body can vary a great deal depending on the make and model of the car that your drive. Total costs may vary from $370 to more than $1500 including parts and labor. There may be a charge for diagnosing the problem as well and you must add the appropriate taxes for your state.

As an example, the cost to replace a throttle body for a 2016 Ram 2500 is estimated at approximately $450 plus tax, while to replace the throttle body on a 2009 Mitsubishi Eclipse would cost as much as $1100. Unless there is something mechanically or electrically wrong, many car owners might find a thorough cleaning to be a better option.

Can you drive with a bad throttle body?

In most cases, if the throttle body is dirty or there is a buildup of grime and carbon deposits, the car can still be driven.

If there is an electrical problem or the throttle position sensor or airflow sensor fails, most drivers will notice immediately that there is a problem. These issues can be more dangerous and car owners should have the throttle body assembly checked by a mechanic.

You may have the following issues to deal with: Poor acceleration, surging acceleration, hesitation, unable to attain higher speeds, bucking or jerking, and delays in response after depressing the gas pedal. 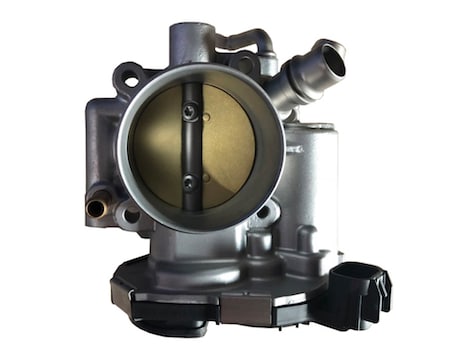 What does a throttle body do?

The throttle body controls the amount of air entering the engine by moving a butterfly to allow more or less air to enter.

A throttle body sensor measures the position of the butterfly valve and reports this information to the car’s engine control module. The ECM determines the proper amount of fuel to air mixture to deliver the power needed while driving and acceleration.

If the air fuel mixture is not perfect, your engine will not operate efficiently and deliver the power needed. A throttle body that is corroded with grime, dirt, or carbon deposits cannot deliver a uniform level of air, which can cause the ECM to deliver fuel at incorrect levels.

How can a throttle body be cleaned?

This can be a do-it-yourself project, however many drivers will opt to have this work completed by their mechanic. Fuel-injected engines should have their fuel injectors cleaned at the same time. The following steps should be followed:

When does a throttle body need to be replaced?

Throttle bodies usually last the lifetime of the vehicle with cleaning completed every 75000 miles, depending on road conditions and environment.

If you have cleaned the body, checked the connections both electrical and mechanical throttle linkages and you are still having problems with engine performance, it is probably time to replace the throttle body.

Have a certified mechanic perform the cleaning, verification of the connections, and replacement if needed. This should eliminate any further engine performance problems related to the throttle body malfunction.

What is a throttle body spacer?

A throttle body spacer is a one-inch metal spacer connected to the outlet of the throttle body on one side and the air intake manifolds on the other.

The theory is that the spacer changes the airflow, enhancing the horsepower provided by the engine as well as torque delivered. It may also improve fuel economy.

The consensus appears to be that it works well on some gasoline engines and not at all on others. Before adding one of these throttle body spacers to your engine, investigate what the improvements might be for your specific engine configuration and look for online reviews.

The engine throttle body controls the airflow into the engine. A butterfly valve operates to either allow more or less air into the system, while the engine control module manages the appropriate flow of fuel mixture to deliver the desired power.

Grime, dirt, and carbon deposits can disrupt the airflow, decreasing engine performance. Cleaning can improve and return performance to normal levels. Throttle body position sensors and air flow sensors can fail and may require the throttle body to be replaced.

Most vehicle’s fuel injection systems are programmed by a computer based on the position of the pedal. Therefore, your vehicles throttle body and map sensors play an important role.