Before limited slip differentials were installed in vehicles, cars would get stuck in slippery conditions, with one wheel spinning and the other stationary. The amount of torque applied to the differential from the engine would cause the wheel that was sitting on ice or in mud, for example, to spin while the other wheel with traction would be stationary.

Limited slip differentials were developed to get around this problem to provide better traction in many different situations where one wheel would lose traction while the other sat on a dry surface, providing excellent traction.

What are limited slip differentials? 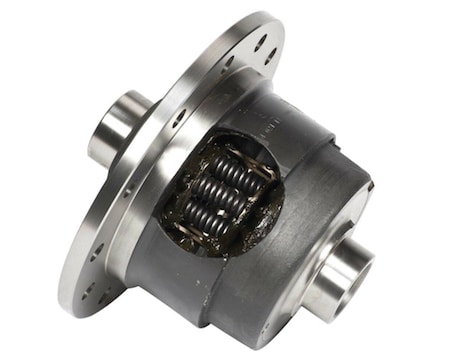 However, when the drive wheels are sitting on ice, for example, torque is applied to the differential, and it allows the wheel with the least traction to spin while the other remains stationary or spins at a slower speed.

What is the purpose of a limited slip differential?

The purpose of a limited slip differential is to prevent too much power from being allocated to one wheel when surface traction is limited. Both wheels will retain forward motion, and traction is not limited to the wheel that is slipping on the road surface due to ice or some other slippery situation.

Without the LSD, the wheel on the slippery surface would spin, while the other wheel would remain stationary. The vehicle’s forward motion in this situation would be severely limited. There are several different designs and models of limited slip differentials.

Is a limited slip differential worth it?

Limited slip differentials are worth it since they provide much better traction on slippery surfaces, both in straight driving as well as cornering. LSD’s are used in high-performance cars and race cars to improve traction and avoid slippage on low traction surfaces.

Modern cars are generally using LSD’s. Their benefits on slick or wet roads, snow, and ice conditions are enormous. They prevent many drivers from becoming stuck in the snow or on ice when one wheel has lost traction on the ice and the other wheel is still on a high traction surface.

How to tell if your car has a limited slip differential?

You can use a floor jack to lift the front or rear wheel of your car. Support the automobile with some jack stands under each side, and shift the transmission into “Neutral” on your automobile. 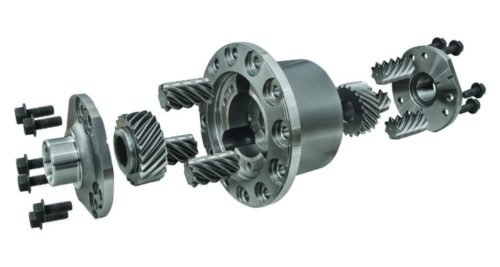 The parts of a differential are pretty straightforward, consisting of a case, side bearings, side gears, pinion gears, and pinion pin. Without the limited slip components, this configuration works well on dry surfaces.

However, once one or more wheels come in contact with a slippery surface such as ice, the majority of torque is applied to the wheel with the least traction, causing it to spin.

The side gears reside inside the case and are attached to the axles (one for each axle) connected to the wheels. The side gears turn with the case from the main drive gear and turn at the same speed provided that neither wheel is on a slippery surface. The side gears are pushed towards the compression plates by a slip spring sitting between the two gears.

There are two pinion gears, lock the two side gears in place as long as both wheels are turning at the same speed. If one wheel slips, the pinion gears allow the other wheel to remain stationary without damaging the slip differential.

There are several different types of LSD differentials depending on the make and manufacturer of the vehicle.

They fall into several different categories such as fixed value, torque sensitivity, speed sensitivity, and those that are electronically controlled in modern vehicles. Further, there is clutch, geared, viscous, and Geroter LSDs. We will expand on these as follows:

The clutch disc type of LSD consists of a stack of discs, half attached to the drive shaft, while the other half is attached to the carrier of the spider gears. As torque is applied to the differential, the discs are compressed, coupling the driveshaft to the axle shafts and causing the wheels to turn.

If one wheel is slipping, this pressure increases on the wheel that is not slipping, causing it to turn and move the vehicle forward. The 2011 Audi Quattro RS 5 differential exhibits this type of differential.

A geared LSD is a mechanical design that is torque-sensitive, consisting of a set of worm gears and spur gears. When torque is applied, the gears are pushed against the walls of the differential housing, which causes friction and turns the wheel axles. Slippage causes heat to build up, increasing the friction limiting the differential speeds between the two front wheels.

The Viscous LSDs are filled with high viscosity silicone-based oils. Perforated discs are used and attached to the input and output shafts. As the oil heats up and expands, pressure is applied to the discs causing them to pull together, with the result that there is a drop in speed difference between the two shafts.

Can you do a burnout with a limited slip differential?

However, your engine must have sufficient power to deliver enough torque to each wheel burnout with both tires. The clutch plates inside the LSD will slip and clamp in place as the vehicle accelerates and experiences one wheel or the other slipping on the paved surface.

Which is better, limited slip or locking differential?

Most people will notice the difference between the two types of differentials when they are turning a corner on a dry road. As you turn a corner, the inside wheel revolves more slowly than the outside tire.

Both an open differential and a limited slip differential will allow the inside and outside tires to revolve at different speeds while maintaining equal power to both wheels.

A locking differential locks both wheels, so they both turn at the same speed regardless of road conditions or if you are turning a corner. With a locked differential, the outside wheel will chirp or slip on the surface of the road.

How much does it cost to replace a limited slip differential?

The cost to replace a limited slip differential depends on the make and model of the vehicle, whether it is rear-wheel drive, front-wheel drive, and four-wheel drive. The cost can vary from $1500 to as much as $4000. The important step is to arrange for repairs as soon as you suspect there is a problem with the differential.

The longer you drive the vehicle; the more damage you may cause to the differential. Replacing leaking gaskets is much less expensive compared to replacing bearings that have warn out vs. replacing the entire unit. Replacing a gasket might cost in the range of $150, bearings around $400, and replacement as much as $4000!

What type of differential does a performance car have?

Other Types of Automotive Differentials Explained

There are several auto differentials available on the market that are compatible with vehicles on the road.

They run from basic open differentials (standard differential) to more complex differentials that provide limited slip and locking differentials. Advanced designs include sensors and electronics to optimize tractions for your vehicle.

The open differential is the basic type of differential and is the least expensive. This design allows the wheels to turn at different speeds; however, power cannot be limited to one wheel, or the other, if one of the wheels loses power.

As a result, this differential does not perform well on slippery roads caused by wet conditions or snow and ice.

Welded/Spool Differentials are the same as a locked differential with a permanent weld to keep it in this mode. Great for off-roading, but not so much on the highway or around town. Since this is a welded differential, there is no method of unlocking the differential.

Limited slip differentials are also like open differentials. However, they use a system of clutches and plates to lock the differential when one wheel loses traction and sending equal power to both wheels.

These are automatic lockers and useful in situations where slippery conditions cannot be anticipated. They improve safety as well as stability.

Center differentials equalize traction between the front and rear wheels. Four-wheel drive vehicles may have one, two, or three of these differentials to improve stability, traction, and safety.

Like the Active Differential, the Torque Vectoring Differential is one of the most advanced differentials. Using a combination of sensors that the car’s computer uses to determine the optimum traction requirements.

Sensors include the position of the throttle, surface conditions, use of the brakes, speed sensitivity, and the steering system.

On the other hand, a Two-Way (2-way) differential is designed to provide the same limiting torque in both forward and reverse direction, which means it will help limit acceleration under engine braking.

Suggested Post: Understanding the importance of the wheel bearing.

While locked and welded differentials have their place in off-road environments, the limited slip differential, either mechanically or electrically controlled, significantly improves traction and driveability.