A Mass Air Flow Sensor measures the amount of air flowing into the engine. The engine control module or engine control unit (ECM) uses this information to manage the Air-Fuel-Ratio or AFR. A bad MAF feeding incorrect information can cause all kinds of issues. The AFR may be too lean, leading to hesitation, poor acceleration, and difficulty starting when the air mass fuel ratio is incorrect. Keep reading to learn the top bad MAF sensor symptoms.

If the AFR is too rich, there is too much fuel entering the system, leading to an increase in fuel consumption, potentially causing the engine to produce black smoke exiting the exhaust system, engine running roughly, surging, and hesitation of the engine. Change the air filter and clean the MAF to ensure they are not limiting the flow of air into the engine. Clean filters maintain the air and fuel mixture at an optimum level. 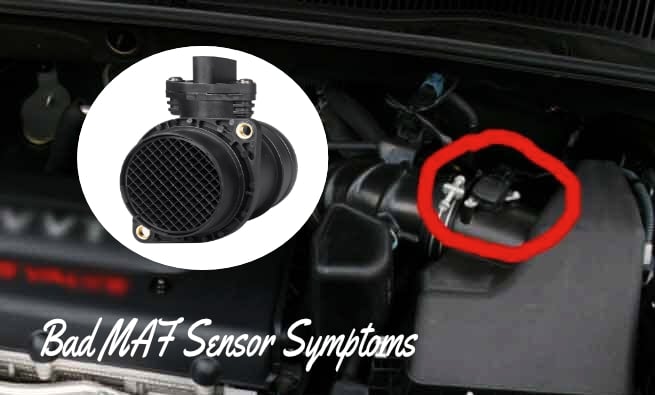 There are at least ten common symptoms that can indicate the MAF sensor is bad. However, before replacing the MAF, car owners should check for all of these symptoms and diagnose the actual cause. We will expand on each of these later in this post.

The ECM can cause the check engine light on the dash to illuminate whenever there is a malfunction. The ECM also stores diagnostic trouble codes, which can be read by a mechanic with a code reader. The code can indicate a bad MAF as well as other codes. This code and some of the following symptoms can assist your mechanic in narrowing down the specific problem.

Poor or a delay in acceleration suggests that the air-fuel ratio is off. The fuel is not fully combusting and therefore delivering insufficient power to the engine to drive acceleration. The MAF may not be accurately reporting the airflow. Acceleration hesitation or engine drags can also be caused by several other conditions or malfunctions, including clogged fuel lines and fuel injection devices or a clogged fuel pump impacting internal combustion in the engine.

An engine runs smoothly when the engine receives the correct fuel to air mixture, and all sensors are delivering information to the ECM. Anytime a sensor provides poor information, such as an incorrect airflow reading, the ECM will try to compensate by adding more fuel or lowering the fuel inserted into the combustion chamber.

As the airflow changes from lean idling to too much fuel, so does the engine, causing the RPM to fluctuate and run rough. Overall, smooth idling is difficult to achieve without the proper amount of fuel.

The ECM will attempt to compensate for the airflow readings from the MAF, adding more fuel to the combustion chamber than needed. With insufficient air, the fuel does not completely burn, increasing pollution levels and causing a lower fuel economy. As soon as drivers notice the engine using more fuel than normal, have a mechanic check for error codes and the condition of the MAF.

In some situations, the ECM may compensate by attempting to add more fuel than needed when more power is required, and there is insufficient airflow indicated by the MAF to the ECM. The excess fuel does not fully burn, causing black sooty smoke to exit from the exhaust pipe. Drivers allowing this condition to persist risk clogging the catalytic converter, which can be expensive to replace.

As the ECM attempts to compensate for erratic data from the MAF, it may cause too much fuel to enter the combustion chamber or too little. As more fuel is added, your car may surge ahead with extra power as if you are accelerating. If insufficient fuel is added, there may be some hesitation. Both situations can be unnerving, especially if you are in heavy close traffic.

Difficulty To Turn Over

Engines can stall for several reasons; however, one of the main reasons is too lean a fuel to air mixture. The ECM depends on the MAF to tell it how much air is entering the system. If the fuel to air mixture is very lean, the engine may stall under load. This situation can be dangerous if the engine stalls while driving or at a busy intersection.

The MAF could be operating as designed, but insufficient air is entering the system, causing the ECM to increase the fuel mixture to deliver more power. The culprit can sometimes be a clogged air filter and is one of the simplest things to check before heading off to a mechanic for repairs. Replace the air filter if you notice dirt and debris, especially insects clogging the filter.

What Does A Mass Airflow Sensor Measures?

Located between the throttle body and the air filter, the MAF measures the airflow into the engine, which varies due to temperature and local pressure. The measurement is reported to the ECM, which calculates the fuel to be delivered to the injectors. The intake air temperature sensor also reports the temperature of the air.

How to Fix a Bad MAF Sensor

Before replacing the MAF sensor, car owners may want to check the air filter is clean. Also, check that the wiring to the MAF is secure. If your check engine light is on, grab a scanner and read the error code that causes the light to illuminate. The scanner will have a list of common trouble codes for your vehicle. Code Po101 – MAF suggests there is a problem with the MAF. However, the code is generated sometimes due to:

Can You Clean a Dirty Mass Airflow Sensor?

The MAF sensor can be cleaned. Some manufacturers recommend sensor cleaning every time the air filter is replaced. Use a recommended cleaner for dirty MAF’s, spray 10 or 15 sprays onto the sensor wires and plate while being careful to avoid damaging these items. Cleaning the MAF is relatively quick, easy, and inexpensive.

How Much Does It Cost to Replace a MAF Sensor?

If you do the work yourself, replacing the faulty mass airflow sensor may cost in the range of $300 depending on the make, model, and year of the car. A mechanic can replace mass airflow sensors; however, their time and profit may push the MAF sensor replacement cost closer to $500 or more for the service.

The MAF measures the airflow into the engine assisting the ECM to control the fuel to air mixture. Regular cleaning of the MAF and replacement of the air filter can help to avoid future problems.

Having a faulty mass air flow sensor or oxygen sensor can result in excessive fuel consumption. The mechanic can try to clean the sensor before getting it replaced, and this can save you money. Also, he/she can use various scan tools to determine if your vehicle needs other repairs.

Sometimes the check engine light illuminates for clues regarding why your engine may be surging, hesitating, hard to start, black smoke coming from the exhaust, or lacks power. The diagnostics of a bad (MAF) mass air flow sensor and replacement should be left in the hand of a professional.

If I replace the mass flow sensor in my 2004 Honda accord will the car stop jerking..and if so how much to replace it plus mechanic costs? Thanks I appreciate some input asap..

If it is the MAF sensor. It would have to be checked and thoroughly inspected to diagnose it correctly. The ignition system should also be checked from start to finish. I also like to complete a compression test and a cylinder leak down test, The other thing that you would need to do is to make sure that there are no vacuum leaks as well. It all comes down to the diagnostic procedure that is performed,

Just bought a 1986 corvette L98 engine with 73K miles, it has sit for almost two years due to death of owner. Car ran and started good until I added gas….. When I got it I Replaced battery, no or very little gas init, so I put 1/2 can of sea foam in it with 1/2 tank of mid grade gas. Car would crank but not fire for about 30 seconds, then acted like it was rich, then fired and ran good. Stopped and same thing. Next task is to replace air filter, it has an aftermarket performance Throttle body… Read more »

I replace all sensor in my 2004 Nissan 350Z, ie; crankshaft sensor/ camshaft/ ignition module set and spark plug. Now test driving it it started having a pickup and hard starting w/c is what your describing. Will do as you suggest cleaning the MAF sensor first

I replace my mass airflow sensor about a year ago and now I starting to have problems with it again? why…

I just replaced the Mass Air Flow Sensor in my 2003 Volkswagen Passat 1.8
And the check engine light is still on and now it’s flashing. And it still idle the wrong way. If you have any idea what it could be, please let me.