Modern cars are equipped with a host of safety features that can help prevent accidents and protect passengers in an accident. These include things like airbags, seat belts, adaptive cruise control, and stability control.

So, why are new cars safer than old cars? New cars have advanced technologies and improved structural designs. Also, they tend to be built with stronger materials that can better withstand the force of an impact.

An older car that wasn’t designed with these passenger safety features is more likely to crumple in a collision, which can cause serious injuries to passengers.

In addition, new cars often have better visibility thanks to things like larger windows and improved lighting. This can help drivers see potential hazards on the road and avoid accidents.

Another reason why modern vehicles are generally safer than older cars is that they’re subject to stricter safety regulations. These standards are always evolving as we learn more about how to keep people safe on the road.

5 Reasons That Make Newer Cars Safer Than Others 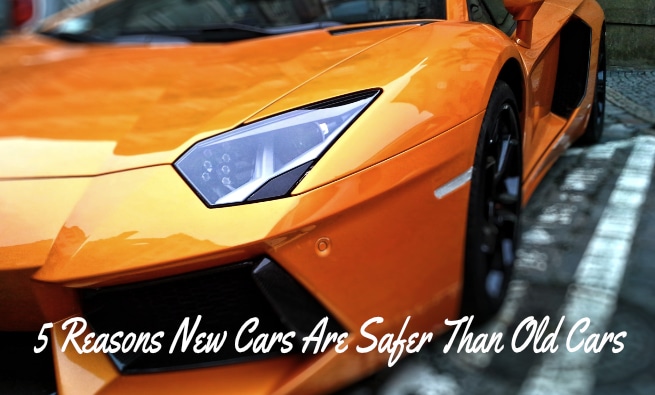 According to the NHTSA and the IIHS (Insurance Institute for Highway Safety), modern vehicles are much safer cars than older ones. In fact, the overall fatality rate in the US has decreased by 31% since 1975.

So, if you’re shopping for a new car, know that you’re making a wise choice not only for your own safety but for the safety of your passengers as well.

New cars are safer thanks to a variety of safety features that have been introduced over the years. These include:

Airbags: First introduced in the 1970s, airbags have been shown to reduce fatalities by 30%.

Seat belts: When used correctly, a seat belt can reduce the risk of fatal injury by 45% – 60%.

Adaptive cruise control: This technology uses sensors to keep a safe distance from the car in front of you, which can help prevent collisions with pedestrians.

Lane departure warning: This uses sensors to detect when the car is veering out of its lane and sends an alert to the driver.

In addition to new safety features, newer cars also have advanced technologies that can help prevent collisions. These include:

Backup cameras: These give drivers a clear view of what’s behind them when they’re reversing, making it easier to avoid crashes.

Blindspot detection: This uses sensors to detect when there’s a car in your blind spot and sends an alert to the driver.

Automatic braking: This can automatically apply the brakes if it detects an imminent accident.

Crumple zones: Modern cars are designed with crumple zones that help absorb the impact of a collision. This can protect the vehicle’s occupants from serious injuries.

New cars are also safer thanks to improvements in structural design. For example, newer vehicles have stronger roofs that are less likely to collapse in a rollover accident.

In addition, the chassis of new cars are designed to absorb the energy from a collision, which helps protect the passengers inside. Driving an old car that wasn’t designed with these safety features can put you at a greater risk of injury in an accident.

The materials used in older cars may also not hold up as well in a collision. For example, steel that is more than 20 years old can be up to 50% weaker than newer steel and may be worth noting. This means that older cars are more likely to crumple in a collision.

Manufacturers take into account modern safety regulations. These regulations are constantly evolving as we learn more about how to keep people safe on the road.

Crash fatalities have significantly decreased according to NHTSA’s data, and much of this is thanks to advances in safety features, such as braking systems. They tend to have better performance, and they are more reliable in modern cars.

As a car owner, you need to purchase a vehicle that has undergone rigorous crash examinations. The results of these tests are used to improve the design of new cars so that they can save lives.

Nowadays, there are also more stringent safety regulations that manufacturers must adhere to. This means that new cars are held to a higher standard and must pass more rigorous crash tests.

Are older cars more likely to break down?

The metal on an older car will have corroded and weakened over time. In addition, the rubber seals and hoses will have degraded, which can cause leaks.

Older cars are also more likely to have electrical problems because the wiring has become brittle and cracked with age. These problems can make your car more likely to break down or catch fire.

The airbag system in an older car may also be less effective. The propellant can degrade over time, which may not inflate as effectively in an accident. It’s important to note that even if your car is newer, it may not have all of the latest safety features.

Why is a modern car safer in a collision?

Speed is now easier to control with anti-lock and suspension systems. Older cars have lower plastic to metal ratio, depending on the model year and the brand of the vehicle.

You can also expect a better service from a new vehicle. If you can afford a new vehicle, the extra safety is worth the price. When you purchase a new vehicle, you are also getting the latest in safety technology and equipment.

Getting hit by another car might not be a concern due to the crash test results for the car you are buying. Of course, it is often not the car but the driver that determines safety. This is why it is so important for motorists to be aware of and stick to the speed limit at all times.

Having a black box installed could be smart as it encourages car owners to be more cautious on the road as factors like sticking to the speed limit are monitored and will impact the cost of insurance.