Smart cars vary in weight based on the features and options of the vehicle along with the capability of the vehicle in terms of the number of passengers. Well, how much does a smart car weigh?

The average weight of an electric smart car appears to be around 1125 kg or 2480 pounds. Smart cars with seating capacity for four people can weigh 1200 kgs or 2645 pounds. Some articles suggest the average weight can be as low as 1850 pounds depending on the options and features included with the vehicle.

Many smart car designs also include an all-electric version, which can increase the weight slightly, while removing the need to fuel up as needed.

What is a smart car, and how it works?

A smart car, by definition, utilize the latest technology to manage everything from fuel consumption to increase the safety of your driving. They are small compact designs that make navigation on busy city streets a breeze. Increasingly, smart cars are employing technology that assists the driver in navigation, avoiding other vehicles and pedestrians while driving.

They were initially conceived to respond to high fuel prices during the 2008 financial crisis, which also brought on high fuel costs. In the future, they are expected to be fully autonomous electric cars, independent of fuel costs providing increased safety capabilities to the occupants. That’s where the 2008 smart ForTwo came to be about.

History of the smart car:

The construction of the smart car body cell is made out of a constructed Tridion Steel, which is designed to absorb the impact in case of a crash. It comes with front and rear bumpers that are attached to two steel safety beams. The first generation models were designed by Swatch and Volkswagen. However, the new generation of the smart car is a product from Daimler Benz and the Mercedes Benz well-known brand.

What is the average weight of a smart car?

The weight of a smart car depends on the make and model, along with the options that are chosen by the buyer. However, the average weight appears to be around 1550 pounds, with some variants as much as 1850 or more. Electric versions tend to be heavier, weighing in at 2500 pounds.

How much does EQ ForTwo Coupé smart car weigh?

The smart ForTwo coupe varies in weight depending on the year of manufacture. For example, the 2020 smart car weighs 2392 pounds or 1085 kg. At the same time, the 2019 2dr smart USA auto comes in at a heft 2998 pounds’ gross weight. The weight may also vary based on features and models, for example, a soft-top convertible feature.

How much does a EQ ForTwo Cabrio smart car weigh?

The new Smart ForTwo Cabrio smart car weight is 920 kg’s or 2028 pounds, seats two people, and has a range of 92 km’s or 57 miles, although specifications from the manufacturer suggest as high as 74 to 82 M. The range depends on the environment and driving conditions. Top speeds of 130 km/hr or 81 m/hr.

How much does a EQ ForFour smart car weigh?

The Smart ForFour comes with a 60KW power plant, and this smart cart weigh is at 1200KG’s or 2645 pounds. The EQforfour seats four people and has a range of between 90 and 160 kilometers depending on driving conditions and environment. It is advertised with speeds of 130 km/hr or 81m/hr.

How can I determine the gross vehicle weight of a smart car?

The GVWR or gross vehicle weight rating of a vehicle can be found on the tag on the pillar by the driver’s side. This is the total weight allowed in your vehicle and includes the curb weight of the car and the passengers along with cargo allowed in your car.

The owner’s manual provides a host of information about your vehicle, including the curb weight and the allowed number of passengers, including cargo that can be carried by your vehicle. The technical specifications section usually summarizes this information along with data about vehicle operating range, charging time for electric cars, and much more.

Vehicle scales are typically used to weigh trucks to verify load weights and confirm safety limits. However, car owners who wish to confirm the curb weight of their vehicles can also have their cars weighed. There will be a fee for this service. The majority of car owners rely on their owner’s booklet or information found online to find the actual weight of their vehicle.

Verifying the sticker in the driver’s interior door

The GVWR sticker is usually found on the pillar between the front driver’s interior door and the rear passenger seat, along with vehicle weight, tire pressures, and more. Many also contain a bar code that can be read by a bar code reader. Occasionally stickers are added on the windshield in front of the driver’s seat, indicating the last oil change and other safety information.

What is the typical smart car weight distribution? 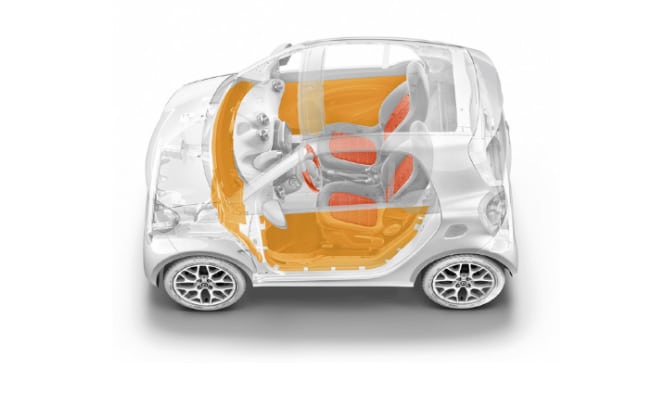 Smart car manufacturers aim to spread the weight 50/50 over the front and rear tires. The weight is spread evenly. Load weights are taken into account in making these calculations. Cars with a 50/50 weight spread also tend to be faster and spread the wear and tear evenly across the vehicle.

For example, if more weight is on the front, the front wheel brakes must work a little harder to stop the car. They will wear out more quickly, requiring replacement before the brakes.

Smart cars also minimize the total weight as much as possible to improve the efficiency of the drive train and extend maximum mileage on a single charge or gasoline fill up. In summary, it is distributed evenly between the front and rear wheels.

Smart cars come with many of the standard safety features along with several that are unique to the Smart Car lineup. For example, four sets of airbags are included in strategic locations, anti-locking brakes, active brake assist, and doors lock automatically.

In addition, the following specs can be found on many smart car models – breakdown kit with air compressor and sealant, crosswind assist, acoustic presence indicator, and more. Each year additional features are added to improve the safety level of the vehicle. Some models allow soft top conversions to reduce the overall smart car weight.

How many miles per gallon can you get out of a smart car?

The average miles per each gallon for smart cars appears to be approximately 40 MPG. Compared to the average American vehicle, which is much larger and heavier and only obtains an average of 20 MPG fuel economy, the smart car can deliver huge savings in the cost of gasoline.

Late-model new smart cars are increasingly being powered by lithium-ion batteries. These smart cars have a vehicle operating range of 80 miles depending on conditions and can be recharged up to 80% in less than 40 minutes utilizing a high-speed charger. 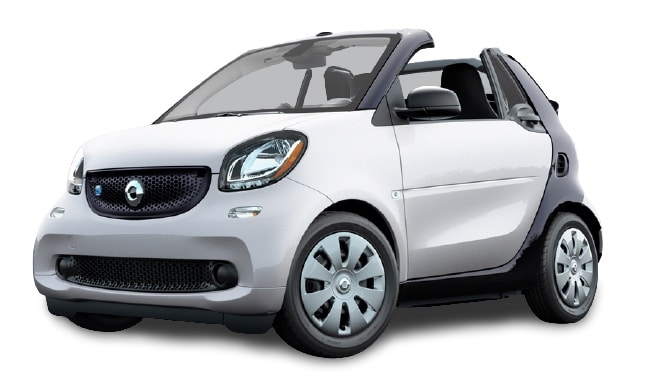 Many people have questions about smart cars regarding weight, safety, distance traveled, and insurance costs. These are the most common questions when you’re looking to determine how much does a smart car weigh:

What is the heaviest part of a smart car?

The heaviest parts in a gasoline-powered smart car are typically the engine and transmission. While in electric smart cars, the car battery is by far the heaviest part, since it provides all of the power needed to turn on the vehicle.

For the most part, the steering wheel, engine, and body have the most impact on a smart car weigh. On the contrary, the wheels are one of the lighter parts of the smart car.

Which is the heaviest smart car that has been made?

The average weight of a smart car is approximately 1550 pounds, while later generation smart cars reached 1850 pounds. Electric powered smart cars weigh as much as 2500 pounds depending on specs, options, and size.

How fast is a smart car given that is lightweight?

Electric smart cars have a maximum cruising speeds of 81 MP and can accelerate from 0 to 60 in 11.6 seconds. They have a range of 74-82 miles depending on driving conditions.

How expensive is it to insurance electric cars?

Electric cars at the present time are more expensive to insure, primarily due to the availability of parts and locations that can make repairs. The Insurance Institute for Highway Safety IIHS has evaluated the Smart ForTwo, and it says that it meets the basic forward-collision warning.

Additionally, the smart car is also made out of hard steel, which makes it safe to drive. So, this should help lower the auto insurance rating in the USA. However, choose the best insurance rate you can find on the market.

What type of batteries do smart cars use?

Smart car batteries are typically lithium-ion with a useable battery capacity of 17.2 kilowatts. There are 96 car battery cells, and they can be recharged to 80% in less than 40 minutes with a high-speed electric charger.

Are these electric cars safe?

All-electric vehicles must meet and pass the same safety standards set in place for traditional internal combustion engines. In addition, at the end of the vehicle’s life, the batteries can be recycled. They have two side airbags that can protect the front passengers.

How far can you drive a full tank in a smart car?

Well, how much does a smart car weigh? The average smart car weighs 1550 of total pounds; however, electric cars can add on a 1000 pounds primarily due to the battery. In comparison with the Rolls Royce that weighs over six thousand pounds, it is almost three times lighter. They achieve better gas mileage than traditionally powered vehicles.

Many smart designs now include electric versions with added specs such as crosswind assist. Gas-powered smart cars can achieve up to 350 M/P tank, while battery-powered cars achieve up to 82 M/P charge depending on road conditions. It is one of the best well design cars.

You now know how much does a smart car can weight based on each model and specs. The smart car has a recommended gross weight, which can be determined by the weight of the car plus the passenger and luggage weight. Cars are one of our strongest passion, so ask us any questions.